This Resource Page addresses the issue of a building's outward appearance. The Oxford English Dictionary defines architectural style as, "A definite type of architecture distinguished by special characteristics of structure and ornament." Historically there have been numerous terms to describe this aspect of architecture: style, character, expression, and so forth.

Style, a term rarely used by architects today but common in the popular press, is primarily used to describe historical styles of the past that have been precisely categorized by historians. Typically these styles developed at specific moments in time, in particular geographic locations, and within unique cultural conditions. For example, the North American Georgian or Victorian house is a descendent of residential architectural forms developed in England during the reign of King George and Queen Victoria respectively. These two styles, however, flourished much later in the United States. Style is not inherently related to building function, but describes visual appearance. The language of ornament employed throughout a building frequently identifies the architecture of a particular period. The following text considers style from the standpoint of context, historical periods, vernacular, and "themed" architecture.

"Context" and "contextural" are two words that have become common in building terminology, but are used in many different ways. Architectural "context" refers to the immediate physical, cultural, and even economic surroundings of a building. "Relating to the context" means fully understanding this existing context and developing a clear strategy for how a new building will relate to these conditions. A difficult aspect of context is that it is always changing, unless a project is situated within a protected historic district where few physical changes are permitted. Thus, "being contextural" does not imply a particular stylistic response, but depends entirely on the specific context. For instance, the red brick architecture of Boston would be distinctly non-contextural in the adobe district of Santa Fe, just as the dense urban fabric of San Francisco differs from the ubiquitous suburban strip condition. See Figs. 1 and 2.

Every building site is located in a precise geographical place that must be understood at a range of scales—national, regional, local, neighborhood, block, and immediate adjacencies. Sometimes there is a physical consistency to a place, such as Boston's Beacon Hill district, and other times multiple styles and times coexist in rich harmony as in nearby Harvard Square in Cambridge. See Figs. 3 and 4. All new construction must be considered in light of the particular qualities of the place—is consistency important, or is diversity the norm?

Architects often speak of "zeitgeist" or the "spirit of the time" in which they are building. The twentieth century emphasis on the unique aspects of a particular time was an explicit rejection of nineteenth century revivals of earlier historic periods and associated stylistic eclecticism. The famous Modern architect, Ludwig Mies van der Rohe, believed that buildings should be "pure expressions of their time. Their true meaning is that they are symbols of their epoch." Today as well, the replication of styles from previous historical periods is seriously questioned in terms of contemporary appropriateness. In residential buildings, however, we still see a prevalence of earlier historical styles.

Stylistic classification based on historical periods is a common way to describe buildings, but the boundaries between stylistic periods are not always clear. Many buildings display characteristics of more than one style, resulting in eclectic hybrids often adapted to particular climates and cultures. Nevertheless, such categories are often a good starting point for understanding the visual properties of a building.

"Theming" is a current stylistic and marketing technique extensively employed in retail and entertainment buildings, although this trend is also spreading to residential construction. Theming does not refer to a specific historical style, but to the blatant application of a "theme" to a building in order to provide a strong but often unsophisticated identity to a place. The Walt Disney Company's planned town of Celebration near Orlando, Florida and the recent Las Vegas, Nevada casino complexes such as "New York, New York" are well-known examples of themed architecture. Characteristics of a "real place" like New York City are collapsed and simplified into easily recognizable visual clues for the immediate gratification of passersby and building occupants. See Figs. 9 and 10. 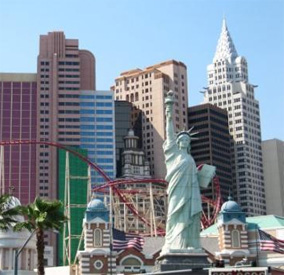 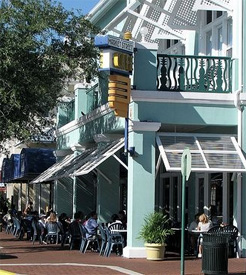 The following case study examines why a particular style was chosen, and how the building was located within an existing context. The Guggenheim Museum in Bilbao, Spain, designed by the American architect Frank Gehry, is an excellent example of a major civic institution placed within an existing urban context. Sited at the juncture of a dense, mid-rise downtown commercial district and an industrial riverfront zone, the museum employs a strategy of connection and contrast with the two existing contexts. Two formal languages, combined within the same building, mediate between the orthogonal context of the city grid and its architecture and the irregular architecture along the river's edge. For example, the portion of the building along the consistent downtown edge employs a cubic normative geometry in heavy masonry, while irregular shapes and a reflective, lightly colored titanium skin occurs along the river. This second language contrasts with the rectangular geometry and matte, dark red and brown color palette of the downtown commercial architecture, while relating to the metallic industrial context. Ultimately, this complex strategy signals the special significance of the museum, both in terms of its public program and role in announcing the new, post-industrial future of Bilbao. See Figs. 11 and 12. 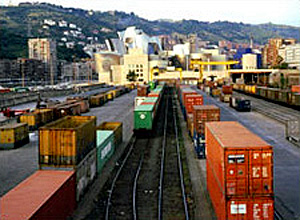 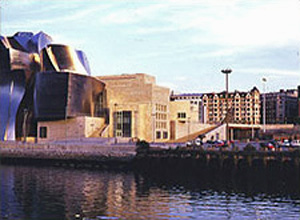 Historical style is often controlled by codes and standards in two situations: Historic Preservation Guidelines and Neighborhood Covenants. In the case of historic districts and individual historically designated buildings, the codes both protect the existing architecture from demolition and control the amount and character of building alterations. Neighborhood Covenants also seek to control the exact physical characteristics of a neighborhood, often including stylistic restrictions and a host of specific details.

The National Trust for Historic Preservation provides resources and support in the effort to preserve and revitalize America's historic structures and communities.