Solar ventilation air preheating, or solar ventilation preheat, technology uses the energy of solar radiation to preheat ventilation air. This technology, which uses the principle of a transpired collector consisting of perforated metal siding typically painted a dark color, has been commercially available since the 1990s. Maintenance requirements are minimal due to the simplicity of the technology. The technology has no moving parts other than the ventilation fan, so it lasts for decades.

The best applications for solar ventilation preheat technology are industrial buildings such as vehicle maintenance fleet, which require a lot of ventilation air and match well with the aesthetic of metal siding. However, the technology has been used in applications where aesthetics are at a premium, including at visitor centers at recreation areas. 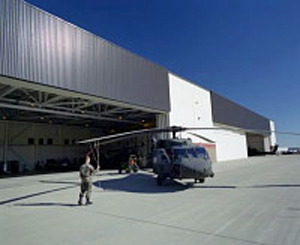 This overview is intended to provide specific details for Federal agencies considering solar ventilation preheat technologies as part of a new construction project or major renovation.

The process of a solar ventilation air preheating system begins when incident solar radiation warms the transpired solar collector. This is a wall constructed of perforated metal panels four feet wide and any length. The collector is perforated with tiny holes and painted a dark color to absorb maximum solar radiation.

The transpired collector is secured to the south-facing wall by mounting brackets that stand the transpired collector away from the wall to create a 4 in. to 6 in. plenum, or space, to retain the pre-heated ventilation air. Like all metal siding, the collector and mounting brackets must withstand wind loads in the 90 to 110 miles per hour range for most areas and as high as 150+ miles per hour for areas with hurricane potential.

Perimeter flashing is used to seal the edges around the wall and around any doors, windows, wall-mounted electric meters or panels, and other obstructions. Lighting fixtures can be mounted on the surface of the transpired collector. There are weep-holes with insect screens at the bottom flashing to let out any water that may get behind the collector.

How Does it Work?

If the flow through the wall drops to less than 2 cubic feet per minute of air per square foot (CFM/ ft²) of collector, then this heat has a chance to drift away and the collector efficiency drops dramatically. On the other hand, if the flow rate is greater than 8 CFM/ ft², then the fan power required to draw the air through the tiny holes can be excessive. Depending on the size and spacing of the holes in the collector, a flow rate of 4 CFM/ ft² may represent the optimum. The key is to specify a porosity and/or a size of the collector that will maintain a 25 pascal (Pa) pressure drop at the required flow rate.

Solar ventilation preheat technology was invented by John Hollick of Conserval Engineering and introduced in 1994 under the name SolarWall. In the 1990s, the technology was researched at NREL. More recently, the technology was licensed to ATAS International, a manufacturer of metal building components, and is marketed under the trade name InSpire. From 1990 to 2009, over 1,500 systems with a combined collector area of over 3.3 million square feet have been installed worldwide. The U.S. market may represent approximately one-third of this, mainly at industrial facilities in the Northeast and military facilities such as shops and aircraft hangars. Some of the largest systems internationally are used for crop drying in warm climates.

Despite its high efficiency and low cost, solar ventilation preheat technology is underutilized. The following table lists typical installation costs for this technology, although costs as high as $40 per square foot have been reported.

In making a decision about whether solar ventilation preheat is a good match for a construction project, a few factors must be considered: a steady requirement for daytime ventilation air, a location with a lot of heating degree days, no heat recovery on exhaust air, and no excessive internal heat gain (from lights, computers, or people) that obviate the need for heating ventilation air.

The following sections provide specific information about site and use characteristics, economics, heat savings potential, operation and maintenance requirements, and other considerations that may affect this decision.

Factors that determine if a site is good for solar ventilation preheat include:

Solar ventilation preheat systems should ideally be designed and installed in a position that faces within 45° of true south (for the Northern Hemisphere) to maximize solar energy collection. If either is possible, solar ventilation preheat is better on the east than the west side because the heat is usually needed more in the morning than in the afternoon.

A facility that already has available or planned heat recovery from exhaust air—from an air-to-air heat exchanger, run-around glycol loop, or rotating enthalpy wheel—may have a lower cost way to preheat ventilation air 24 hours a day. This would reduce the savings expected from a solar ventilation air preheat system and thus, its economic viability. Solar ventilation preheat is often used where the exhaust stream contains diesel soot or other contaminants that would foul heat recovery systems. Although the two may be used together, it only takes so much energy to heat the ventilation air and the same Btu cannot be saved twice.

The cost assumptions provided in this section depend heavily on the market for aluminum and construction labor. These costs are not expected to go down in the future, but rather are assumed to escalate at a general inflation rate.

The cost of a solar ventilation air preheat system can be estimated based on the installed cost per square foot of system (provided above) and the size of the system. Collector size should allow for 1 square-foot of collector area per 4 cubic feet per minute of ventilation air, although collector size may be limited by available wall space.

The heat saved can be estimated by taking 70% of the overall annual heat delivery of the solar ventilation preheat system (kilowatt hours per year, kWh/yr) from the resource assessment—based on a typical heating efficiency of 70% for transpired solar collectors. Some input energy will be used to power the fan, but that can be estimated at 1 watt per square foot of collector for each hour it is used in a year. The 40-year life span specified for renewable energy systems under the Energy Independence and Security Act of 2007 is appropriate to use for transpired collectors in life-cycle cost analysis.

Due to the low cost and high efficiency of the solar ventilation preheat collector, analysis by the National Renewable Energy Laboratory (NREL) indicates that it is often cost effective even when competing with relatively low-cost natural gas. When competing with more expensive heating fuels, such as electricity or propane, the economics are even better. However, economic viability depends not only on the solar resource, but also on whether a building needs the heat.

The corresponding map shows the natural gas price (in dollars per therm) that would result in a saving-to-investment ratio of 1 or greater. The map indicates that the technology delivers heat for less than $.50/therm in the best areas and less than $1/therm across most of the country. The map also shows the effect of incentives in states such as Illinois.

Savings from a solar ventilation air preheating system depend on two factors: solar resource on a south-facing wall and the heating degree days for the location. Based on these factors, the map shows the potential energy savings across the United States in annual kilowatt hours saved per square meter of collector.

The map shows a bull's-eye in the southwestern United States with a good resource all the way up to the Canadian border. Savings are insignificant in places such as southern Texas and Florida that don't need the heat. These savings are based on the assumption that heat is used 7 days a week. This value would be 28% lower if the ventilation air is not heated on weekends and about 20% lower if the wall is located 45° east or west of south.

Key considerations when integrating a solar ventilation air preheating system into a construction project are:

Operation and maintenance (O&M) is minimal for solar ventilation preheat systems. First, the collector itself has no moving parts. In a very dirty environment it may be recommended to clean the collector periodically. Do not paint the collector as the small holes will plug with paint. Suppliers offer standard 20-year warranties to account for defects in the siding material and for the flouropolymer paint used. Performance guarantees related to the energy delivery would have to be provided by an energy service company under a performance contracting arrangement or a special performance guarantee contract.

Solar ventilation air preheating systems mounted on existing facilities typically qualify for a categorical exemption. Systems added to new construction should not add any additional burden to the National Environmental Policy Act review process or any additional issues to permitting.

There are various local and national codes and standards for ventilated air systems. Ventilation rates are often established according to the American Society of Heating, Refrigerating, and Air-Conditioning Engineers (ASHRAE) Standard 62.

National electric code has requirements such as grounding for electrical components (fan and controls), International Building Code, and American Society of Civil Engineers standards regarding the building facade (such as wind loading).