Building control systems are critical to the operation of high-performance buildings. Smart building controls provide advanced functionality through a computerized, intelligent network of electronic devices designed to monitor and control the mechanical, electrical, lighting and other systems in a building. Advanced technology allows the integration, automation, and optimization of any building system in support of facilities management and the building's operation and performance.

A smart controls system often yields significant reductions in operations and maintenance as well as energy consumption. A smart controls systems can control, monitor, and optimize building services, such as, lighting, HVAC, electrical plug-loads, security, CCTV, access control, audio-visual, as well as occupancy-related systems. The traditional Building Management System (BMS) has been the major focus of building controls since the advent of DDC systems. Emerging into the marketplace however, are advanced technology building management platforms with customizable dashboards, innovative software applications, open programming languages, and expanded integration capabilities. These integrated building management systems (IBMS) and smart controls are better suited to maintain a building's performance and address the increased complexity of today's buildings.

There are several types of control systems that are or have been deployed in buildings; these include manual controls, mechanical pneumatic control systems which are older, obsolete, and no longer used, controls which use electrical contacts and relays, and Direct Digital Controls (DDC). The DDC control systems process data digitally (regardless if it's digital or analog) and can control terminal devices. DDC is the current industry standard for the major control systems, such as HVAC control and is based on the use of microprocessors, software, and electronic control devices. 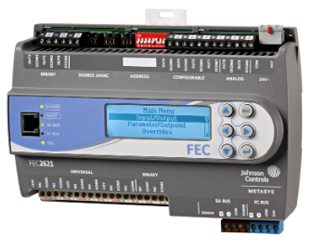 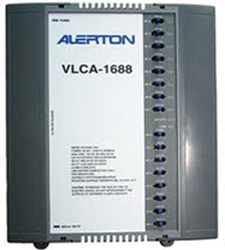 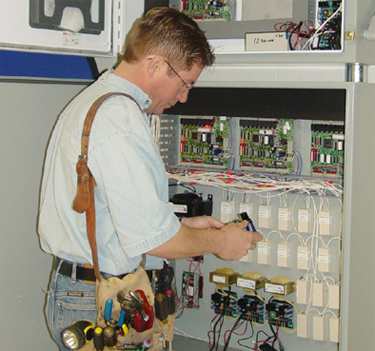 Each of the control systems is a network and the systems have some commonality. They all have data points that can be monitored and managed. The systems need cabling and cable pathways or wireless connectivity. The system will use a communications protocol to exchange data within the control system. Many of the systems will have a databases and system administration workstations. In addition, the systems will probably need IP addresses, power, and equipment room space and will generally require web access. 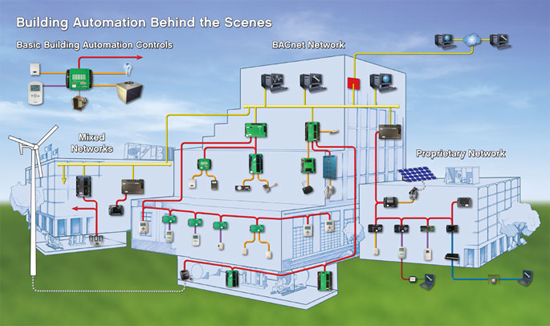 Direct digital control (DDC) is commonly used in more complex HVAC systems. DDC allows for a system controller to compute the sequence of operations based on the digital input from system sensors. Although DDCs are digital controls, they are able to handle analog-to-digital and digital-to-analog conversions. 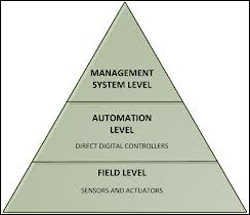 The top level of an HVAC control system is typically the building management system (BMS). The BMS is an operator administration workstation that can communicate with, interrogate, and control any of the controllers and devices on the network. A BMS monitors, supervises, controls, and reports on building control systems. These systems may include access control, video surveillance, fire alarm, HVAC control, programmable lighting, and electric power management. Its basic functions are:

These systems typically display the following responses to an operator's workstation: 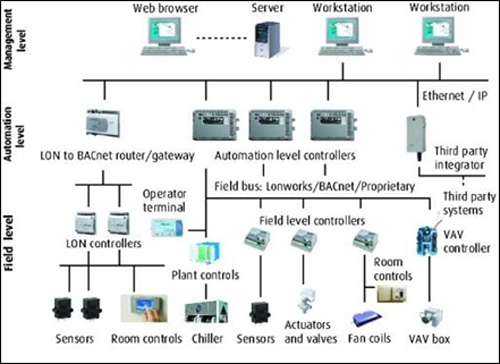 BACnet is an acronym for Building Automation and Control networks. It is an international data communication protocol developed and maintained by the American Society of Heating, Refrigerating and Air-Conditioning Engineers (ASHRAE). It was first published in 1996. BACnet provides a standard for representing the functions and operation of building automation and control devices. For example, the protocol covers how to request a value from a humidity sensor or send a pump status alarm.

The principle of the development of BACnet was to move away from proprietary communications to similar devices by different manufacturers, and instead treat communications and control of like-devices in a standard common way. This approach and structure allows BACnet to be used in HVAC, lighting systems, fire alarm systems and other building automation systems. BACnet can communicate over several types of networks. These include Ethernet and MS/TP (master-slave/token-passing).

LonWorks is often referred to as a communications protocol for control networks, but because it bundles a communication protocol with a dedicated microprocessor and media transceivers, it is more a networking platform. LonWorks was created by the Echelon Corporation. In 1999 the communications protocol (then known as LonTalk) was submitted and accepted as a standard for control networking (ANSI/CEA-709.1-B). In 2009 LonWorks became an international standard, ISO/IEC 14908. Whereas LonTalk addresses the issue of how devices communicate, LonWorks defines the content and structure of the information that is communicated. The protocol is primarily focused on building and home automation.

Modbus is a communications protocol published by Modicon in 1979. At that time Modbus primarily focused on communication to programmable logic controllers (PLCs) manufactured by Modicon and used in industrial automation. Modicon is currently a company owned by Schneider Electric, and in 2004 the Modbus standard was transferred to a nonprofit organization, Modbus-IDA.

Smart building control can apply to a variety of buildings, spaces and building systems. Building use can range from a modest residential building to large campuses of corporate or institutional buildings. The functional objectives of the smart controls are the same; monitoring and managing the building's environment. Smaller buildings may have pre-packaged controls, such as a home automation system. Larger buildings will have a building management system as well as other specialty control systems such as lighting control or power management. Campuses of buildings are likely to have multiple building management systems as well as specialty systems related to building use (healthcare, education, etc.).

There are several trends and developments in the deployment of smart building controls. One of the most important developments is the continuing penetration of Information Technology (IT) into the building control infrastructure. While this is a positive move it can affect the responsibilities and roles of existing service organizations, such as IT and Facilities Management. Also, traditional building management systems (BMS) that monitor and manage a large number of the building's control systems are now being required to integrate with other systems such as a facility management system and business related applications such as asset management and procurement. The most recent trend is data analytics; essentially managing and analyzing the data from control systems. The objective of analyzing data is to identify the performance of systems and the building. A number of companies have developed real-time analytic software applications for building control systems. The most notable applications are those focused on HVAC systems that can identify faults within a HVAC system and provide diagnostic information.