Resiliency of Stationary Fuel Cells and the Natural Gas Grid

by the Fuel Cell and Hydrogen Energy Association

Stationary fuel cells generate power through an electrochemical reaction, rather than combustion, providing clean, efficient, and reliable off-grid power to homes, businesses, telecommunications networks, utilities, and others. Many businesses, institutions, and government facilities around the country are adopting fuel cells for primary and backup power.

Most stationary fuel cells used for primary and base-load power are connected directly to natural gas pipelines that transmit and distribute natural gas throughout the contiguous United States. There are more than 210 natural gas pipeline systems and 305,000 miles of interstate and intrastate transmission pipelines.1 Independent of the electric grid, the natural gas infrastructure is also more resilient because most gas lines are buried underground. This allows for reliable, 24/7 distributed generation of power, providing fuel cell users with continuous power even when grid power is disrupted during natural disasters or other emergencies.

Outages due to disaster situations such as Hurricane Sandy in 2012 emphasize the need for reliable and resilient power sources that can withstand disruptive events. Some outages can last days before full power is restored. This was the case for the more than 8.1 million people from Virginia to Maine and as far west as Michigan who were affected by power outages during Hurricane Sandy.2

Approximately 25 million Americans were affected by power outages in 2012; the average duration of an outage was more than 2.5 hours.3 Stationary fuel cell applications eliminate the vulnerabilities of grid dependency and provide backup power in areas with undependable electricity grids, often for extended periods of time during crisis situations.

One fuel cell manufacturer had 60 fuel cell systems in the Northeast that provided back-up power for telecommunications cell phone towers during Hurricane Sandy. Sites with fuel cells were the only ones to remain in operation during the outages while all other cell towers were down.4 Customers with those carriers could make and receive calls during the outages.

Another fuel cell manufacturer had 21 fuel cell systems installed in the Bahamas during the storm. Seventeen were in areas affected by Hurricane Sandy, and all of these began operating automatically when the grid lost power and continued to provide consistent power to the Bahamian mobile telephone network. The systems ran for more than 700 hours (the equivalent of one month of power) over a seven-day period during and after the storm, producing more than 1,200 kW-hours of energy. Fuel cells maintained continuous and reliable communications for the 347,000 residents of the Bahamas and their emergency responders.5 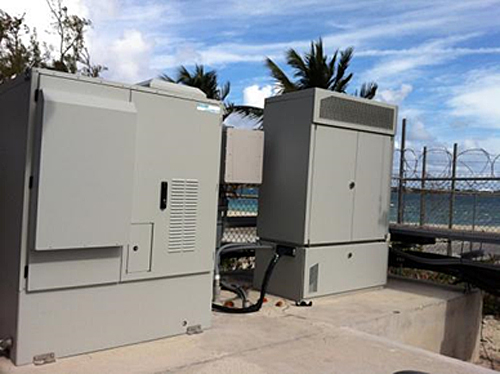 Maintaining reliable power during storms is particularly critical for first responders, 911 operators, and emergency crews, in addition to the general public. During the summer 2012 "derecho" storm that affected the Northeastern U.S., 2.3 million people in Northern Virginia alone lost access to 911 services for several days, in part due to diesel back-up generator failures at a telecommunications facility.6

Power outages can cost businesses millions in lost inventory, wages, delayed production, and damage to equipment and the electric grid. A White House report estimates this cost to be between $18 billion and $33 billion per year.7 Stationary fuel cell systems are a proven, commercially viable power solution that can prevent the staggering costs and inconvenience of power outages. In today's digital economy, data centers take a serious financial toll when they are affected by power outages. According to one study, one minute of downtime will cost a data center between $573 and $11,086 per minute.8

Data centers with stationary fuel cell technology have avoided these problems. The First National Bank of Omaha has used a fuel cell system since 1999 at its technology center in Omaha, Nebraska, the first in the world to use fuel cells. The unit provides 400 kW of clean electricity and heat to power bank facility, which prevents 1,500 metric tons of carbon dioxide from entering the atmosphere each year, the equivalent of planting 350 acres of trees. The bank says using fuel cell technology shows significant cost savings each time they avoid an outage, estimating that one hour of downtime costs them $6 million in lost revenue.9 Other examples include: 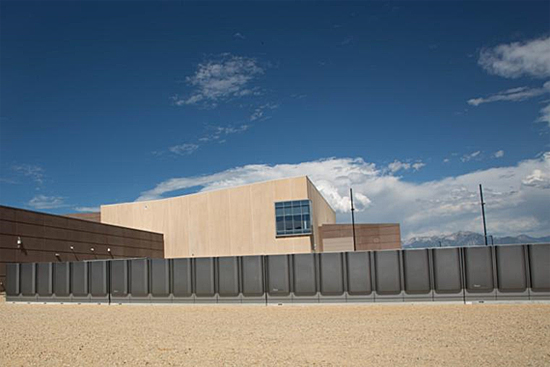 eBay fuel cell installation in Utah. eBay believes in the power of their business model to make a real difference in the world, and that includes how they embrace innovation to reduce their carbon footprint.
Photo Courtesy of Bloom Energy 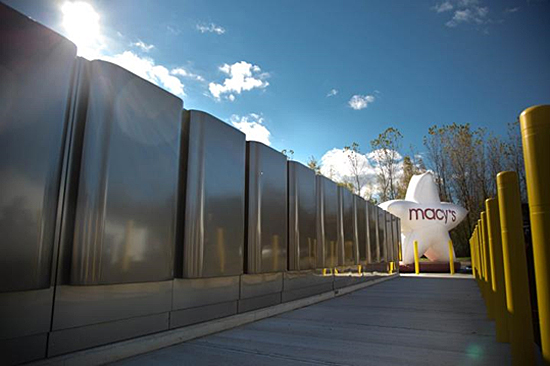 Fuel cells have many advantages over older distributed generation systems, including low maintenance, high reliability, and service continuity over extended periods, and provide numerous environmental benefits. They can operate in conjunction with the natural gas infrastructure, or utilize renewable fuels such as biogas or wind-generated hydrogen.

Diesel generators require regular maintenance, produce toxic and smog-generating emissions, are extremely noisy, have a higher possibility of mechanical failure because of moving parts, and require extra space for storage of fuel. Battery back-up systems need to be charged regularly, and their power capacity and performance decrease over time. An increase in power capacity means larger and heavier batteries must be used.

Natural gas powered fuel cells provide constant, ultra-clean power generation. Data shows that stationary fuel cell power plants create less than one ounce of pollution per 1,000 kW-hours of electricity produced and still run at 80% efficiency.14 Comparatively, traditional combustion systems create 25 pounds of pollutants for the same amount of electricity.15 With no moving parts, stationary fuel cells are quiet (60 decibels, the volume of a typical conversation) and their compact size allows for them to be located indoors or outdoors. Some fuel cells allow for waste capture to create a combined heat and power system (CHP), which in extensive building systems can reduce energy costs by 20-40 percent and can increase system efficiency above 85%.16 The average U.S. electrical grid functions at only about 30% efficiency.