DCV requires an active contaminant sensing system. The components include air sampling sensors, software to interpret the data and air handling system with modulating dampers that uses the data to regulate outside air supply and exhaust. Contaminants are:

In most cases, the sensors used to monitor the different contaminants are the same. A sensor that detects particles and VOCs can also be used to detect CO2 with just a simple reprogramming of the software. The sensors also track temperature and humidity, but this data is backup information and not used to control the HVAC system because of potential conflicts between the two systems. Once contaminants are above a preset level as detected by the sensor, the lab control system is notified and ACH ramps up in stages or to the max designed value (aka an on/off system), depending on the mechanical design, to evacuate the contaminants. This allows for a low ACH of typically 4 when the air is clean and only increases the ACH when there is a demand for more fresh air to purge out the contaminants. Studies from operating research buildings have shown that labs with Demand Control Ventilation system operate at the low Air Change rate per hour 98% of the time. The difference between the on/off and ramp up system is only in the software and operations sequence. The ramp up system conserves energy by introducing the minimum amount of additional fresh air to exhaust the contaminants. It also puts less stress on the AHU system. However, some institutions prefer the on/off system for immediate purging. 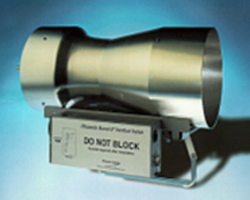 Sensors can be wall mounted or located in exhaust duct.

To further conserve energy, an unoccupied mode reducing ACH to 2 can be implemented. To do this without a DCV system, ASHRAE requires an occupancy schedule be established and strictly followed. No entry is allowed into a space where the HVAC system is operating in unoccupied mode. One hour before occupancy, the ACH has to increase to the occupied setting. This fixed schedule interferes with research as research activities are flexible and happen at all hours of the day. With DCV and its real time active sensing capability, flushing is possible in unoccupied mode and therefore this restriction is removed as stated in the 2011 ASHRAE revision. Occupancy/motion sensor that controls light fixtures can signal the lab control system when a space is unoccupied or occupied. This allows for real time and immediate adjustment to the ACH.

DCV offers significant saving potential and should be used to reexamine ventilation rate in existing laboratories. The air change rates for most facilities can be safely reduce from 10–12 to 4–6 during regular operating hours and even lower during unoccupied hours. Safety is actually improved over the traditional standard air exchange rate because the air sampling increases the ACH immediately after a spill occurs. This system has been proven to flush the room more quickly than the constant flow systems. This is a key strategy in laboratory buildings, old and new, to become more energy efficient. DCV can be implemented into a facility with Variable Air Volume (VAV) system. VAV hoods are preferred as well. The following are steps taken when considering DCV in an existing facility:

"Facilities have become as complex as the research that goes on within them. Putting together the right team and aligning them with the same vision and goals is critical to the success of a project and the environments created by it for years to come. Having specialistsas part of this team was key to getting it right." — Jill Pearsall, Director of Facilities Planning and Development at Texas Children's Hospital.

The Texas Children's Hospital Neurological Research Institute has three lab floors with DCV, two laboratories per floor. Each floor has its own dedicated air handling unit and exhaust is via a centralized system. The system is designed to operate at a maximum 10 ACH in purge mode and 4 ACH when the air is clean. The following graphs taken over the same time period illustrates how a DCV system works. 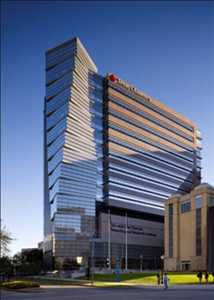 This graph shows the total volatile organic compounds (TVOCs) detected by a photo ionization sensor. This particular sensor detects VOCs from 0.1 to 5 parts per million (ppm). Between 5 and 6 PM, it shows a rise in VOCs. This photo ionization sensor can be calibrated to detect trace amount of ammonia, suitable for use in Vivariums.

At around 7PM, the Metal Oxide sensor detected an increase of VOCs. This sensor detects VOCs in the range of 5 to 100ppm. Both of these sensors are incorporated into one assembly, allowing the detection of VOCs over a wide range of ppm.

In both instances, the ventilation rate of the lab increases as depicted by the increase of supply CFM. This causes a sharp decrease in VOCs after it peaks in the first two graphs. Once the contaminants are purged and the air is "clean", the supply CFM returns to its normal rate, illustrating the effectiveness of DCV. Note the supply CFM value does not correspond to ACH as up to 40% of the clean lab air is recirculated, reducing the energy used to cool and reheat and circulate outside air. This is possible with the lab areas contain within its own zone; air from outside the labs is not recirculated into the labs since other areas do not have the air sampling sensors to ensure the air is clean.

The sensors communicate with the lab control module by sending a voltage drop signal. Once the voltage reaches 2.5V, it triggers the system into purge mode. Since this is an on/off system, the ACH switches to the maximum value of 10 immediately. As discussed earlier, the system can be calibrated to ramp up the ACH slowly, with each voltage drop corresponding to a preset ACH value.

Based on 10 ACH without DCV, the lab volume, number of hoods and set points, our analysis for payback is as follows:

This incredible combination of reducing operation costs while increasing safety is achieved by the fast response of the variable fan drive (VFD) to an alarm from the air sampling sensors. As soon as a spill is detected, the fan automatically increases the 4 ACH up to 10 ACH to quickly provide fresh air to the spill zone. Historically Lab area HVAC cost and ACH rates are cut in half by using this constantly monitored VFD Exhaust system. This solution should be implemented in most research building and hospitals to monitor air quality, increase safety and reduce cost.

The payback period varies by project, affected by the sensor replacement schedule, designed minimum and maximum ACH, utility rates and the use of energy recovery system. In some cases, first cost could be reduced by downsizing the AHUs and main ductworks as the probability of a spill happening in all the spaces at once is small. This needs to be evaluated on a project basis.