Molds are part of the natural environment and are present everywhere. They are usually not a problem indoors. The medical community appears to be divided regarding the threat of mold, but seems to agree that some people with allergies are sensitive to mold and that in sensitive individuals mold can lead to respiratory diseases.1, 2 The issue with mold then is not to prevent any mold growth, or to eliminate any existing mold growth, but to control it within acceptable limits.

To grow, or to establish itself, mold requires at least four elements: mold spores, organic matter (like wood, paper, and drywall), moisture, and warmth. Note that the mere presence of humid air does not necessarily promote mold growth, except where air with a relative humidity (RH) level at or above 80% is in contact with a surface. Carried by air currents, mold spores can reach all surfaces and cavities of buildings. If these surfaces and/or cavities are warm, and contain the right nutrients and amounts of moisture, the mold spores will grow and gradually destroy the things they grow on. To control mold growth, designers should focus on controlling moisture indoors and on the temperatures of all surfaces, including interstitial surfaces within walls.

In addition to mold, other organisms such as bacteria, mites, cockroaches, and insects that are known to infest buildings also depend on moisture. And finally, excessive high moisture content of thermal insulations reduces effective insulation rates by as much as 50%. For all these reasons, moisture control must be a primary consideration in both the design of new buildings and in the renovation of existing structures.

The remainder of this Resource Page will focus on the sources of excessive moisture and some strategies to prevent water infiltration into buildings.

B. Moisture Dynamics Concepts and Definitions

Psychrometrics: The study of air-water mixtures is called psychrometric. The relationship between air temperature, moisture content, and humidity has been codified in a diagram called the psychrometric chart that is indispensable for understanding condensation. Among other things, it indicates the dew point temperature of any air-water vapor mixture.

Water Vapor Permeance and Permeability: Permeability is a material property; permeance is a product property. For board materials, usually permeability is given; for thin membranes, it is customary to provide their permeance.

Vapor and Air Retarders: These materials inhibit the uncontrolled flow of air and water vapor through the building envelope: 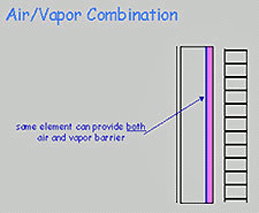 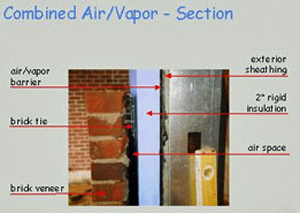 The same material can be both an air and vapor retarder.
Courtesy of Commonwealth of Massachusetts

The photo shows a system that uses a peel-and -stick material as both the vapor retarder and air retarder. The material is installed over the gypsum sheathing but on the warm-in-winter side of two inches of extruded polyethylene insulation.
Courtesy of Commonwealth of Massachusetts

Moisture Movement: Moisture can move through and into building components in three major ways: by rainwater impingement or leakage, movement of moisture laden air, and by diffusion.

C. Sources of Excessive Moisture in Buildings and their Reduction

Excessive moisture in buildings can result from a number of causes:

Rainwater Leaks: The control of rainwater leaks has been the subject of good building practices for as long as human habitations have been built. Even infrequent but serious leaks during heavy storms can lead to mold infestation, are annoying, and can cause serious damage to buildings and their contents. Less severe but more frequent leaks and slow but persistent leaks can cause equally serious damage.

Leakage of Moist Air: Warm and moist indoor air condenses on cold surfaces and interstitial planes inside constructions. This moisture can be stored harmlessly within construction materials or can cause mold growth and deterioration. Excessive moisture content in wood can cause mold growth and dry rot on wood, rust on unprotected steel, and loss of insulating value in thermal insulations.

Duffusion of Moisture through Walls, Roofs, and Floors: Diffusion, as a result of differing vapor pressures across walls or roofs moves moisture through building materials. Materials with low permeancies allow little vapor transmission; materials with high permeancies allow more moisture transmission. Convention calls materials with a Permeance of 1 perm (in SI units, 57 nanogramsof water per second for each square meter of area) "vapor retarders." Note that the diffusion is dependent on vapor pressure resulting from differences in temperature and relative humidity of the air on the two sides of the wall or of individual materials.

Leaking or Burst Water Pipes: The prevention and repair of burst or leaking pipes is the responsibility of plumbers. Except for old steel and iron pipes and frozen pipes, there should be little concern for this issue. However, in some geographic areas, recently installed copper pipes have been found to develop small pinhole penetrations leading to slow but constant leaks. In general, correctly installed pipes made of quality materials should not be a problem for many years after installation.

Indoor Moisture Sources: Human occupancy: breathing, perspiration, cooking, bathing, and clothing washing can add significant amounts of moisture to buildings. Kitchens and bathrooms should be independently vented and washers need to be vented outdoors. Open sumps, aquariums, indoor swimming pools, and hot tubs, as well as excessive indoor plants can increase indoor humidity beyond the recommended 30 to 50 percent. Moisture sources should, where possible, be covered by tight lids when not in use.

Construction Moisture: Wet construction materials, such as in-situ cast concrete and lumber stored unprotected outdoors prior to installation can increase indoor humidity significantly during the first one to two years of occupancy.

The traditional way of preventing moisture problems in walls and roofs was the installation of what then was called vapor barriers, now more accurately referred to as vapor retarders. There are a few commonly quoted, prescriptive rules of thumb for locating vapor retarders in walls and roofs, some of which are listed below. While these rules still may be useful as first cut approximations, the designer must consider the entire array of good practices, needs to conduct a job specific analysis, and must understand local climatic conditions and building practices. 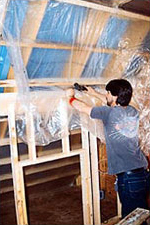 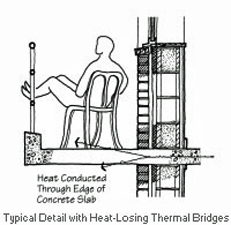 Proper installation is as important as a good design in preventing water infiltration.

Thermal bridges through building envelopes can cause condensation and cold interior surfaces. One solution is to install insulation both on the floor and ceiling of the concrete slab for a few feet.

Following are some issues to consider and strategies to implement during construction to prevent moisture infiltration:

Always conduct a job specific moisture analysis. The only exception would be for a building that is identical or very similar to an existing successful building in the same general location, has the same occupancy, and is constructed of the same materials. The analysis can be a simple manual or graphic method, or, preferably, a computer-based model. As a rule, analysis methods apply to "typical" wall sections. It must be recognized that thermal breaks, corners, window surround details, and other anomalies can be the critical elements and analysis results must therefore be used with care.

Manual Method—Dew Point Method, Glaser, and Kieper Diagrams: All manual methods are based on steady-state analysis. That is, the analysis is made for specific conditions, which that designer selects. It is recommended that the analysis be made for more than one set of assumed conditions; specifically, for both summer and winter conditions. Manual methods are primarily useful for comparing similar wall designs or walls incorporating different wall materials.

Computer-Based Methods are based on dynamic analysis using weather data for specific locations. Most use hourly weather data. The most commonly used methods are MOIST, developed by the National Institute of Standards and Technology (NIST), and WUFI, developed jointly by Oak Ridge National Laboratory (ORNL) and the Fraunhofer Institute for Building Physics (IBP). The advantage of these programs is that they model the moisture and thermal conditions of a selected design over a period, usually over a one- to two-year cycle, using typical weather data. The more advanced models include such refinements as the effect of water impingement on walls, and air and water leakage. However, in many instances the designer has little or no data to develop rational input data. For this reason, less sophisticated models serve the practitioner almost as well as the most sophisticated ones.

All structures should be concerned with moisture control. Special attention must be given to facilities which have a propensity to generate high interior humidity, such as indoor swimming pools, commercial kitchens and laundries, hot tubs, gymnasiums, tennis courts with Har-Tru® or similar surfaces, and all air-conditioned buildings in warm and humid climates.