Microturbines are a relatively new distributed generation technology being used for stationary energy generation applications. They are a type of combustion turbine that produces both heat and electricity on a relatively small scale.

Because of their small size, relatively low capital costs, expected low operations and maintenance costs, and automatic electronic control, microturbines are expected to capture a significant share of the distributed generation market. In addition, microturbines offer an efficient and clean solution to direct mechanical drive markets such as compression and air-conditioning. 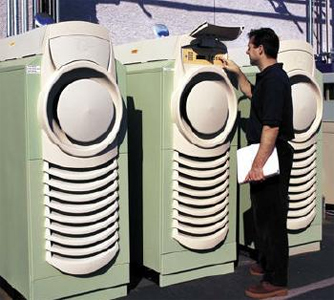 A. What is a Microturbine?

Microturbines are small combustion turbines approximately the size of a refrigerator with outputs of 25 kW to 500 kW. They evolved from automotive and truck turbochargers, auxiliary power units (APUs) for airplanes, and small jet engines. Most microturbines are comprised of a compressor, combustor, turbine, alternator, recuperator (a device that captures waste heat to improve the efficiency of the compressor stage), and generator. The figure below illustrates how a microturbine works. 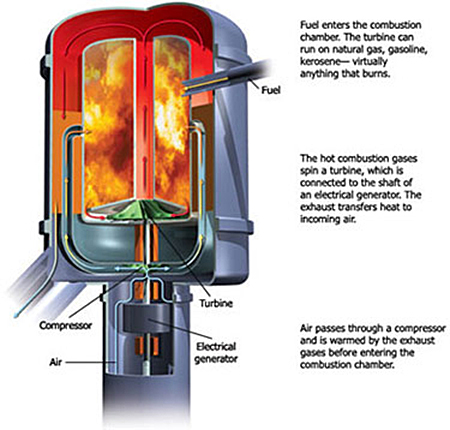 How a microturbine works.
Courtesy of slimfilms.com

B. Types of Microturbines

Microturbines are classified by the physical arrangement of the component parts: single shaft or two-shaft, simple cycle, or recuperated, inter-cooled, and reheat. The machines generally rotate over 40,000 revolutions per minute. The bearing selection—oil or air—is dependent on usage. A single shaft microturbine with high rotating speeds of 90,000 to 120,000 revolutions per minute is the more common design, as it is simpler and less expensive to build. Conversely, the split shaft is necessary for machine drive applications, which does not require an inverter to change the frequency of the AC power.

Microturbine generators can also be divided into two general classes: 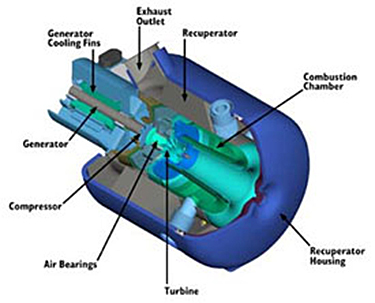 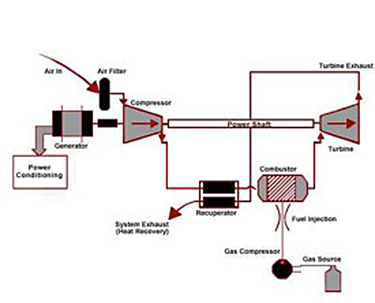 Cogeneration is an option in many cases as a microturbine is located at the point-of-power utilization. The combined thermal electrical efficiency of microturbines in such cogeneration applications can reach as high as 85% depending on the heat process requirements.

Advanced materials, such as ceramics and thermal barrier coatings, are some of the key enabling technologies to further improve microturbines. Efficiency gains can be achieved with materials like ceramics, which allow a significant increase in engine operating temperature.

Some of the primary applications for microturbines include:

Microturbines offer many potential advantages for distributed power generation. Selected strengths and weaknesses of microturbine technology are listed in the following table from the California Distributed Energy Resources Guide on Microturbines.

Microturbine manufacturers are targeting a future cost below $650/kW. This appears to be feasible if the market expands and sales volumes increase.

Maintenance costs for microturbine units are still based on forecasts with minimal real-life situations. Estimates range from $0.005–$0.016 per kWh, which would be comparable to that for small reciprocating engine systems.

Microturbines can be used for stand-by power, power quality and reliability, peak shaving, and cogeneration applications. In addition, because microturbines are being developed to utilize a variety of fuels, they are being used for resource recovery and landfill gas applications. Microturbines are well suited for small commercial building establishments such as: restaurants, hotels/motels, small offices, retail stores, and many others.

The variety of energy consumers that are already using microturbines is large and growing fast. For example: 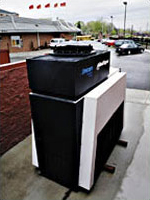 The development of microturbine technology for transportation applications is also in progress. Automotive companies are interested in microturbines as a lightweight and efficient fossil-fuel-based energy source for hybrid electric vehicles, especially buses.

Applicable to all building types and space types

There are more than twenty companies worldwide that are involved in the development and commercialization of microturbines for distributed generation applications. Below are links for five of the leading microturbine manufacturers.