Hydropower is the most common renewable energy technology. Humans have been harnessing water to perform work for thousands of years. For example, more than 2,000 years ago, the Greeks used water wheels for grinding wheat into flour. Hydropower uses the gravitational force of water to turn turbines and generate electricity. The size of the hydroelectric plant is directly related to the amount and flow of water. There are three types of hydropower facilities: run-of-the-river (otherwise known as hydrokinetic or diversion), impoundment, and pumped storage.

This section focuses primarily on run-of-the-river hydroelectric systems under 5 megawatts (MW) implemented at an existing dam. Other systems are not likely to be used in conjunction with a Federal construction project.

This overview is intended to provide details for Federal agencies considering hydropower as part of a major construction project. Further general information is available from the U.S. Department of Energy (DOE) Office of Energy Efficiency and Renewable Energy (EERE) Hydropower Technology Basics. 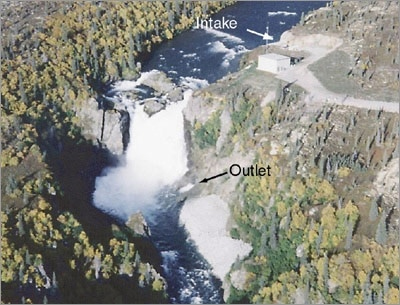 The Tazimina project in Alaska is an example of a run-of-the-river hydropower plant. No dam was required.

A run-of-the-river hydroelectric system is made up of several key components including:

A portion of a river's water is diverted to a water conveyance, a channel, pipeline, or pressurized pipeline, called a penstock. The water is either filtered before or after entering the penstock to remove the accumulated debris before it is delivered to a powerhouse encasing a turbine, pump, or wheel. The moving water rotates the wheel or turbine, spinning the turbine shaft. This motion can be used for mechanical processes, or to power an alternator or generator to create electricity.

The following provides information on the three main types of hydropower technology.

A run-of-the-river system diverts a portion of a river's water to a turbine or wheel. Diversion systems can be put in place with an existing dam that does not have a reservoir. For Federal facilities that are located near an existing dam, this type of system may present a predictable, cost-effective renewable electricity option.

An impoundment facility uses a dam to store river water in a reservoir. Impoundment facilities are typically large-scale hydropower plants, which produce large amounts of electricity for electric utility projects or the government. These systems are synonymous with hydropower in the public's mind, and range from projects around 30 MW to massive projects such as the Hoover Dam. Dams have a significant impact on the ecosystem, thus, the National Hydropower Association forecasted a decline in large-scale hydropower use through 2020. This is a not a feasible technology for Federal facilities to implement into new construction or major renovation projects, but sites could purchase their electricity from an existing large-scale hydroelectric plant in the vicinity.

Pumped storage is a method of keeping water in reserve for peak period power demands by pumping water that has already flowed through the turbines back up to a storage pool at a time of low customer demand for energy. The reservoir stores power in the form of water when demands are low and produces maximum power during daily peak periods. This can be very cost effective with time-of-use electricity rates or in conjunction with other intermittent renewable energy resources. Although new pumped storage projects are not suggested due to environmental issues, there could be opportunities available to implement this type of facility. For example, if a facility is located near an existing pumped storage facility, the efficiency of the system could be improved or utilized to help offset other intermittent resources.

The following items qualify as renewable energy for meeting the Energy Policy Act of 2005 requirement for Federal facilities:

The economics of hydroelectric power can be very favorable, since the energy is predictable and available on a continual basis. However, until recently, the licensing of even small systems, which is handled by the Federal Energy Regulatory Commission (FERC), required the same process as full-size impoundment dams. In 2010, FERC streamlined the rules for systems up to 5 megawatts at existing dams. More details are available from the Small/Low Impact Hydropower Program run by FERC.

Cost estimates are not yet available under this new approval process, but are expected to be cost effective in some cases. There are a variety of financial incentives available for hydropower, including: income tax credits, property tax exemptions, state sales tax exemptions, loan programs, and special grant programs. More information is available at the Database of State Incentives for Renewables & Efficiency (DSIRE).

Only 3% of the nation's 80,000 dams currently generate electricity, and these present a significant renewable energy resource without the environmental concerns of impoundment facilities. In fact, by 2025, 10,000 MW of energy could be gained by converting non-powered dams.

For run-of-the-river systems, applications under the streamlined FERC guidelines need to be located at an existing dam. Not all dams will be likely targets for electricity production, since the amount of power that can be obtained from a stream or river depends on the amount of water flow, the height at which the water falls, and the efficiency of the plant to convert mechanical energy to electrical energy. The National Inventory of Dams is a collection of information about dams in the United States and its territories, produced by the U.S. Army Corps of Engineers.

In March 2011, the Bureau of Reclamation completed a hydropower resource assessment  to study the economic viability of adding hydropower development to existing reclamation facilities. The study concluded that out of 530 sites studied, the department could generate up to 1 million megawatt-hours of electricity annually by adding hydropower capacity at 70 of its existing facilities located in 14 states. In October 2010, a similar study was completed to assess the potential capacity increases at existing hydropower plants .

After considering the energy resource, providing sufficient information in the application will help speed the FERC process. Therefore, be sure to:

Also, be sure to conduct adequate consultation, including:

The operation and maintenance (O&M) costs of hydropower are between 1.5% and 2.5% of investment cost per year. The water intake, water conduit system, and associated equipment are all vital to the functionality of the hydropower plant. Cavitation and erosion should be monitored, and regular inspection of runners of turbines should be carried out and recorded.

The following are important special considerations for hydropower systems.

Producing power can lead to selling excess power to the local utility. Contact the local utility for the facility to find out about application procedures, metering and rates, and the equipment the utility requires to connect the system to the grid. More detailed information on net-metering for hydropower is available in NREL's publication on Small Hydropower Systems .

Net metering laws often specify which technologies qualify, and not all will include hydropower. In addition, all hydropower facilities are licensed by FERC, instead of the state public utility commission. Because FERC has just recently streamlined the process for small hydropower facilities, the market is expanding for these types of technologies, but not all utility considerations and jurisdictional issues have been resolved. Interconnection of the facility may be governed by state rules or via Federal requirements, such as the Public Utility Regulatory Policies Act of 1978, which allow for interconnection but provide less economic incentive for a project.

Prior to pursuing a hydropower facility in conjunction with a Federal construction project, the agency should consult with the local utility and state authorities to determine the ability for the facility to make economic use of the project and its power generation.