Global climate change, caused by the emissions of greenhouse gases (GHGs) that trap solar heat in the Earth's atmosphere, has major impacts on both people and the environment. Nearly 40% of GHG emissions are attributed to the design, construction, and operation of buildings. As the majority of GHG emissions are from fossil fuel use, reversing climate change requires the reduction of building energy use and transition to renewable energy sources. To achieve these reductions, an overview of greenhouse gases, various benchmarking and reduction strategies, and applicable Federal regulations and legislation are addressed in this page.

A. Overview of Greenhouse Gases

The following units of measurement have been developed to compare the different greenhouse gases:

The following figure shows the typical breakdown of all GHG emissions in the U.S. by the major GHGs relative to Carbon Dioxide—i.e., CO2 Equivalents. 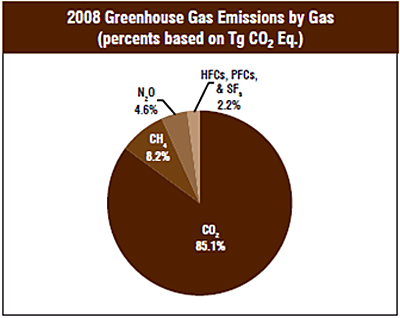 * Carbon Dioxide (CO2) has a variable atmospheric lifetime, and cannot be specified precisely. See the EPA's Glossary of Climate Change for more information.

Image courtesy of the EPA Inventory of U.S. Greenhouse Gas Emissions and Sinks: 1990-2008.

GHG emissions are defined and or regulated by two international treaties, the Montreal Protocol and Kyoto Protocol. The third, the Greenhouse Gas Protocol was developed by the World Resources Institute (WRI) and the World Business Council for Sustainable Development, which are not for profit organizations.

GHG accounting is being further developed based on protocols including Greenhouse Gas Protocol, an international accounting tool for governments and businesses to understand, quantify, and manage greenhouse gas emissions. According to its developer, the World Resources Institute, "The GHG Protocol, a decade-long partnership between the World Resources Institute and the World Business Council for Sustainable Development, is working with businesses, governments, and environmental groups around the world to build a new generation of credible and effective programs for tackling climate change. It provides the accounting framework for nearly every GHG standard and program in the world—from the International Standards Organization to The Climate Registry—as well as hundreds of GHG inventories prepared by individual companies."

GHG emissions are commonly classified into "scopes" based upon the source of the emission and by whether they are either direct or indirect. Direct emissions come from sources that are controlled by the emitter. Indirect emissions are those that are a consequence of the activities of the emitter, but that occur at sources owned or controlled by another entity. These scopes were developed and defined by the WRI as part of their Greenhouse Gas Protocol.

Common sources of Federal greenhouse gas emissions are shown in the image below. 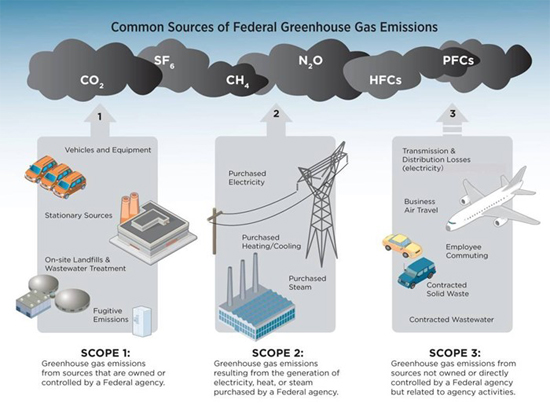 Image courtesy of the EPA

GHG reduction efforts should be preceded by a benchmarking of the building in question. Benchmarking is essential to identifying the existing or proposed emissions of a building. By benchmarking a building through the use of a GHG emission inventory tool or carbon footprint analysis, it will be possible to identify the largest contributors to a building's emissions and the greatest source of opportunity when it comes to specifying reductions. Executive Order 13834, Section2(h)issued in 2018, requires agencies to report on “report on energy management activities, performance improvements, cost reductions, greenhouse gas emissions, energy and water savings, and other appropriate performance measures.”

One of the most widely used benchmarking inventory tools is the Federal Energy Management Program Reporting Portal. This Excel workbook, released October 6, 2010 by DOE's Federal Energy Management Program (FEMP), provides electronic reporting capability for the Federal agency compiled comprehensive GHG inventory for FY2010 and the base-year 2008 GHG inventory for the purpose of measuring progress. Additionally,Executive Order 13834, Section2(h),— issued in 2018, requires agencies to report on “report on energy management activities, performance improvements, cost reductions, greenhouse gas emissions, energy and water savings, and other appropriate performance measures.”
The tool collects agency-aggregated data necessary for calculating scope 1, 2, and 3 GHG emissions in the commonly-used units of energy consumption and fugitive emissions as well as activity data for estimating scope 3 indirect emissions. It provides users with the summation of their calculated emissions as well as other performance results for other sustainability goals.

Version 6.1 is the most up to date version as of the publishing of this page. See the link to the workbook energy.gov/sites/prod/files/2015/10/f27/annual_ghg_data_report_v6-1.xlsx . The GHG and Sustainability Data Report Demonstration is available here.

A sample screenshot of the results summary from this tool is shown below. 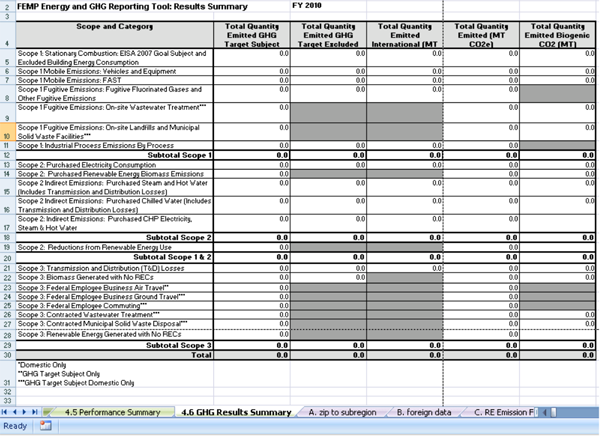 Partial Screenshot of Worksheet 4.6 GHG Results Summary in the FEMP Reporting Portal.
Image courtesy of the workbook available at: www.fedcenter.gov/_kd/go.cfm?destination=ShowItem&Item_ID=16387

To assist federal agencies in calculation and reporting GHG emissions, the Federal Greenhouse Gas Accounting and Reporting Guidance  was issued. This Guidance is accompanied by a separate Technical Support Document for Federal GHG Accounting and Reporting (TSD), which provides detailed information on inventory reporting requirements and calculation methodologies. Federal agencies are required to use this Guidance when reporting GHG emissions under E.O. 13514.

Another important resource is the U.S. Greenhouse Gas Inventory Report: 1990–2014. This is an emissions inventory that identifies and quantifies the country's primary anthropogenic sources and sinks of greenhouse gases that is essential for addressing climate change.

Strategies to reduce GHG emissions should focus on both scope classification and the specific gases being targeted. Several of these measures are either interlinked and/or contribute to savings across multiple scopes, which is why Scope 1 and Scope 2 reductions will be discussed together below.

D. Applicable Federal Regulation and Legislation as They Relate to GHG Reduction

Applicable to all Building Types and Space Types

There are many tools and resources available for managing Federal building GHG emissions including the following: