Direct or non-electric use of geothermal energy refers to the immediate use of the energy for both heating and cooling applications. Geothermal direct use goes back to when people used hot springs for bathing, cooking food, and loosening feathers and skin from game. Today, the primary forms of direct use include heating swimming pools and baths or therapeutic use (i.e., balneology), space heating and cooling (including district heating), agriculture (mainly greenhouse heating, crop drying, and some animal husbandry), aquaculture (heating mainly fish ponds and raceways), and providing heat for industrial processes and heat pumps (for both heating and cooling). In general, the low geothermal fluid temperatures (i.e., <300°F) required for direct heat use are available throughout most of the United States, but are more abundant in the western states.

A low-temperature, geothermal direct-use system is made up of several key components, including: 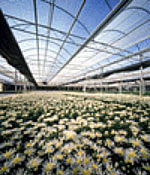 A well is drilled into a geothermal reservoir to provide a steady stream of hot water. A production facility is used to bring up the water, and a mechanical system delivers the heat directly for its intended use. The cooled water is injected underground or into a storage pond via a disposal system.

A downhole pump is a tool used in a well to lift the fluid to the surface. Unless the well is artesian, downhole pumps are needed, especially in a large-scale direct-use system.

The fluid state in transmission pipelines of direct-use projects can be liquid water, steam vapor, or a two-phase mixture (i.e., steam and water). These pipelines carry fluids from the wellhead to either a site of the application, or a steam-water separator. Thermal expansion of metallic pipelines heated rapidly from ambient to geothermal fluid temperatures (which could vary from 120°F to 390°F) causes stress that must be accommodated by careful engineering design. The cost of transmission pipelines and the distribution networks in direct-use projects is significant. This is especially true when the geothermal resource is located a great distance from the main load center.

Heat exchangers are commonly used to transfer the heat from the geothermal water to a secondary fluid. The heating of individual rooms and buildings is achieved by passing this heated secondary fluid through heat convectors (or emitters) located in each room. Cooling can occur with an absorption refrigeration system.

A peaking system may be necessary to meet maximum load. This can be done by increasing the water temperature or by providing tank storage. Both options mean that fewer wells need to be drilled. When the geothermal water temperature is warm (below 120°F), heat pumps are often used. The equipment used in direct-use projects represents several units of operations.

Fluid disposal is either surface, in a storage pond, or subsurface, through an injection well.

The two most common types of downhole pumps are lineshaft pump systems and submersible pump systems. Both types have been used for many years for cold water pumping and more recently in geothermal wells (for example, lineshafts have been used on the Oregon Institute of Technology campus in 192°F water for 55 years). If a lineshaft pump is used, special allowances must be made for the thermal expansion of various components and for oil lubrication of the bearings. The lineshaft pump is preferred over the submersible pump in conventional geothermal applications because it costs less and has a proven track record. However, for setting depths exceeding 800 ft., a submersible pump is required.

A two-pipe system must be used when mixing of spent fluids is called for, and when the spent cold fluids need to be injected into the reservoir. Two-pipe distribution systems cost typically 20% to 30% more than single-pipe systems.

Steel piping is used in most cases, but fiberglass reinforced plastic or polyvinyl chloride (PVC) can be used in low-temperature applications. Above-ground pipelines have been used where excavation in rock is expensive and difficult; however, below-ground installations are more common to protect the line eliminate traffic barriers. 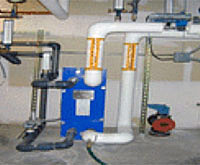 The principal heat exchangers used in geothermal systems are the plate, shell-and-tube, and downhole types. The plate heat exchanger consists of a series of plates with gaskets held in a frame by clamping rods. The counter-current flow and high turbulence achieved in plate heat exchangers provide for efficient thermal exchange in a small volume. In addition, compared to shell-and-tube exchangers, they have the advantage of occupying less space, they can easily be expanded when additional load is added, and are typically 40% cheaper. The plates are usually made of stainless steel, but titanium can be used when the fluids are especially corrosive. Plate heat exchangers are commonly used in geothermal heating systems in the United States.

Shell-and-tube heat exchangers may be used for geothermal applications, but are less popular due to problems with fouling, greater approach temperature (the difference between incoming and outgoing fluid temperature), and the larger size as compared to the plate type.

Downhole heat exchangers eliminate the problem of disposal of geothermal fluid, since only heat is taken from the well. However, their use is limited to small heating loads, such as the heating of individual homes, a small apartment, house, or business.

The lithium bromide system is the most common because it uses water as the refrigerant. However, it is limited to cooling above the freezing point of water. The major application of lithium bromide units is for the supply of chilled water for space and process cooling in either one- or two-stage units. The two-stage units require higher temperatures (about 320°F), but they also have high efficiency. The single-stage units can be driven with hot water at temperatures as low as 180°F. Lower geothermal water temperatures result in lower efficiency and require a higher flow rate. Generally, a condensing, or cooling, tower is required, which will add to the cost and space requirements.

For geothermally driven refrigeration below the freezing point of water, the ammonia absorption system must be considered. However, these systems are normally applied in very large capacities and have seen limited use. For the lower temperature refrigeration, the driving temperature must be at or above 250°F for a reasonable performance.

Direct geothermal resources fill many needs: space heating and cooling, greenhouse heating, industrial processing, and hot water, to name a few. Geothermal district heating systems can save consumers 30% to 50% of the cost of natural gas heating. It is important to consider using a geothermal fluid several times to maximize benefits. For example, the heat could be used for process heat and the resulting lower-temperature fluid could be used for space heating. This multi-stage utilization, where lower water temperatures are used in successive steps, is called cascading or waste heat use.

The first is the difference between the available geothermal water and the temperature needed for the intended use or process. This difference determines the feasibility of the system. The greater the difference in temperature, the smaller the size and lower the cost of the heat transfer equipment.

Geothermal projects require a relatively large initial capital investment, with small annual operating costs thereafter. Thus, a district heating project, including production wells, pipelines, heat exchangers, and injection wells, may cost several million dollars. By contrast, the initial investment in a fossil-fuel system includes only the cost of a central boiler and distribution pipelines. The annual operation and maintenance (O&M) costs for the two systems are similar, except that the fossil-fuel system may continue to pay for fuel at an ever-increasing rate; while, the cost of the geothermal fuel is stable. The two systems, one with a high initial capital cost and the other with high annual costs, must be compared. The following table quantifies the cost of various direct-use types based on experiences in the United States.

Average costs of direct-use systems in the United States for 2005.

Note: Based on 30–year life at 8.0% interest and O&M at 10% of capital cost. The above costs include a shallow well (<984 ft or 300 m) and no retrofit costs; however, cost can vary by as much as 100% depending on the local geology, hydrology, building construction, and infrastructure.

*Assumes one production and one injection well for a single building
**Heat pump figures are considered only for the heating mode and the capacity factor is a nation-wide average.

Most direct-use applications use geothermal fluids in the low-to-moderate temperature range between 120°F and 300°F. In general, the reservoir can be exploited by conventional water well drilling equipment. Low-temperature systems are also more widespread than high-temperature systems (300°F); so, they are more likely to be located near potential users. In the United States, for example, of the 1,350 known or identified geothermal systems, 5% are above 300°F, and 85% are below 195°F. Most geothermal resources are located in the western United States, indicated by the red and orange colors in the map below.

Map of geothermal resources in the United States

Resource assessment for direct-use depends on the size of the project. For smaller projects such as individual residences, apartments, and businesses, and for small greenhouse and aquaculture projects, only local experience, information on adjacent wells (if any), and data on the local geology are investigated. If this information appears positive, an exploration well is drilled and should be anticipated to serve as the production well.

In addition, for larger projects, such as for district heating or industrial operations, some geophysical investigations, such as seismic or resistivity surveys, should be run. These surveys will delineate underground structures such as faults and potential reservoirs that might contain geothermal fluids. This is then followed up with shallow (up to 500 ft or 150 m) temperature gradient holes drilled and logged for temperature to determine geothermal gradients over the potential sites determined from the geophysical surveys. If these data appear positive, then a test well is drilled to the depth of the expected resource, and pumped to determine the capacity and temperature. Finally, if this test proves successful, production and injection wells are then drilled.

Standard equipment is used in most direct-use projects, provided that allowances are made for the nature of geothermal water and steam. Temperature is an important consideration, and so is water quality. Corrosion and scaling caused by the unique chemistry of geothermal fluids may lead to operating problems with equipment components exposed to flowing water and steam. In many instances, problems caused by fluids can be designed out of the system.

One such example concerns dissolved oxygen, which is absent in most geothermal waters, except perhaps the lowest temperature waters. Care should be taken to prevent atmospheric oxygen from entering the system, which can be accomplished by proper design of storage tanks. The isolation of geothermal water by installing a heat exchanger may also solve this and similar water quality-derived problems. In this case, a clean secondary fluid is then circulated through the user side of the system.

The below-ground equipment standards are usually specified for high temperatures (above 212°F or 100°C) resources by state and country regulations and standards that would require special values, such as blow-out preventers and drilling muds. These are usually regulated and inspected by departments of geology and mineral industries or local level organizations. Low temperature resources (below 212°F or 100°C) are usually regulated as standard water wells under the supervision of water resources departments or similar agencies.

Above-ground installation equipment standards are generally not regulated by geothermal requirements, but as standard off-the-shelf equipment. These standards are specified by agencies such as the American Society of Testing and Materials (ASTM) and the American Society of Heating, Refrigerating, and Air-Conditioning Engineers (ASHRAE) in the United States. Local building codes may also control specifications and installations.