Geothermal electric uses geothermal energy to turn a turbine and generate electricity. The first geothermal power generator was tested in Italy in 1904. The first large-scale geothermal electric plant in the United States began operation in 1960, operating successfully for 30 years and producing 11 megawatts (MW) of net power. Geothermal technologies produce about one-sixth of the carbon dioxide that a relatively clean natural-gas-fueled power plant produces, and less than 1% of the carbon dioxide of a fossil-fuel plant. Geothermal electric power plants can run at 90% availability, and the hydrothermal fluids are recycled back into the earth after use.

Geothermal electric is not a widely used renewable energy technology for most new construction or major renovation projects since most buildings do not have direct availability to a geothermal resource. Furthermore, geothermal electric plants require a large capital investment and a typical building budget that does not allow for building this type of a power plant. A site, however, can purchase their electricity from an existing geothermal electric plant if available. If a project warrants a larger generation facility, especially one that can also make use of steam and process heat, geothermal electric in a combined heat and power system may be an option. 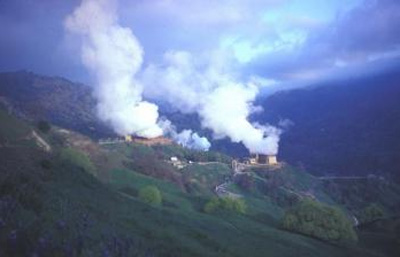 The Geysers, near Santa Rosa in northern California, is the world's largest electricity-generating geothermal development.

This overview is intended to provide specific details for those considering geothermal technologies as part of a major construction project. Further general information is available from the U.S. Department of Energy (DOE) Office of Energy Efficiency and Renewable Energy (EERE) Geothermal Electricity Production Basics.

The conversion technologies from hydrothermal fluids to electricity include flash steam, dry steam, and binary-cycle power plants. Each geothermal electric system is made up of several key components including a:

Dry steam power plants are the simplest and oldest design, upon which the two other systems are based. They use a geothermal production well that produces fluid heated by the natural heat of the earth. The steam goes directly to a turbine, which drives a generator that produces electricity. The fluid then goes into an injection well, which is a well that is specifically drilled for the safe disposal of the geothermal fluids.

Binary-cycle power plants take the hot geothermal fluid from the production well, but also use a secondary fluid, which passes through a heat exchanger. Energy is extracted from the hydrothermal fluids causing the working fluid to vaporize, drive the turbine, and generate electricity.

Binary-cycle power plants are the most common type of geothermal power generation in use today. The secondary fluid used in these plants is usually isobutene or isopentane. Since the geothermal fluid passes from the production well, heats the secondary fluid, and goes back down the well, the binary-cycle power plant is a closed loop system. Therefore, there is virtually nothing emitted into the atmosphere. The U.S. Department of Energy is working to achieve $0.03 to $0.05 per kilowatt-hour (kWh); 15,000 MW of new capacity are estimated within the next decade.

The United States leads the world in electricity generation with geothermal power, producing 14.86 billion kWh, or 0.4% of the total U.S. electricity in 2008. The United States Geological Survey estimates that 70% to 80% of geothermal resources are hidden, making it a challenge to find a site. As a result, investigators are currently working on issues in drilling, resource usage, equipment, and geochemistry.

Geothermal electricity systems are typically most economic in large, utility-scale applications. Many Federal facilities will not be interested in building a geothermal electric power plant, considering the limited resource availability and the high capital cost. Military installations may be interested in baseload, renewable power, and facilities near lower-temperature resource may be able to take advantage of combined heat and power applications. The Massachusetts Institute of Technology released The Future of Geothermal Energy , an in-depth report that evaluates the potential use of geothermal energy within the United States.

As with most renewable energy technologies, geothermal power plant costs are heavily weighted toward construction and early expenses, rather than toward the operation. This includes well drilling, pipeline construction, resource analysis, and power-plant design. Capital investment can be split into three phases: exploration and drilling, construction of power facilities, and discounted future re-drilling/well stimulation. The capital cost for a geothermal power plant is about $2,500 per kilowatt (kW), whereas operation and maintenance costs range from $0.01 to $0.03 per kWh.

Tax incentives and various forms of financing are often used to offset costs of developing a geothermal power project. Tax incentives, including property and sales tax incentives, and tax credits, provide an incremental motivation for geothermal electric development. They can be used for both small and large projects, since they are often based on a percentage of total costs or the market value of the equipment.

Map of geothermal resources in the United States.

Given the high capital cost of these power plants, geothermal electric facilities generally supply base-load power to grid operations under a long-term power purchase agreement in order to acquire funding for the initial investment.

Geothermal plants are capital-intensive, but are relatively cheap to run. Costs range from $0.01 to $0.03 per kilowatt-hour, and can operate at 90% availability or more. Maintenance costs increase if a geothermal power plant operates at greater than 90% availability. This high price is justified, because the maintenance costs are covered by the increased production of the plant.

Special considerations for geothermal electric system design and installation include interconnection and environmental review and permitting:

The Database of State Incentives for Renewables & Efficiency (DSIRE) is a comprehensive source of information on state, local, utility, and federal incentives and policies that promote renewable energy and energy efficiency.

Most of the important environmental impacts from any geothermal electric power plant are associated with ground water use and contamination. There are concerns about land subsidence and induced seismicity as a result of water injection and production into and out of a reservoir. Other issues such as air pollution, noise, safety, and land must also be considered. Any new geothermal plant is likely to add considerable issues to a National Environmental Policy Act review, and the permitting process can be time consuming.