A fuel cell operates like a battery, but does not run down. Instead of charging, it is an electrochemical device that uses oxygen and a readily replenished fuel, such as hydrogen, to produce electricity. Individual fuel cells are stacked in a module to produce the desired energy output, much like commercial batteries use an array of individual cells. With heat and water as the primary byproducts, fuel cells are virtually pollution-free and have more than two times the efficiency of traditional combustion technologies, which typically have an efficiency rate of 33% to 35%. As long as fuel is supplied to the fuel cell, energy in the form of heat and electricity will be produced. Fuel cells can provide power for a range of applications—from laptop computers to utility power plants. A power converter can convert the direct current (DC) power produced by the fuel cell into alternating current (AC) power that is compatible for use by the facility and the utility. According to the U.S. Department of Energy (DOE) Office of Energy Efficiency and Renewable Energy (EERE) Fuel Cell Technologies Office, when the heat from the fuel cell is captured and used in combination with electrical power (such as combined heat and power), fuel cells can have efficiency rates between 70% and 85%.

One of the advantages of fuel cells is that hydrogen fuel can be derived using a variety of domestic resources such as biomass, water electrolysis, natural gas, propane, and methanol. Hydrogen generated by water electrolysis, which is the splitting of water molecules into hydrogen and oxygen using electricity, can be beneficial when used in combination with variable renewable energy technologies such as solar and wind. When the electricity used for water electrolysis is produced by a variable renewable energy source, the hydrogen stores the unused energy for later use and is classified as a renewable fuel and energy resource.

Benefits and advantages of fuel cell technologies include:

A fuel cell system is made up of several key components that may include:

Phosphoric acid fuel cells systems are currently being used to provide power to office buildings, hospitals, nursing homes, banks, schools, and utility power plants. The phosphoric acid fuel cell is considered the first generation of commercial fuel cells and is one of the most mature cell types. These cells have an operating temperature of about 100°C to 220°C, and achieve an electrical efficiency of about 37% to 42% alone, with up to 85% efficiency when used in combined heat and power applications. This type of fuel cell is typically used for distributed power generation applications that provide primary power and heat to facilities. These are large fuel cell systems that provide 100 kilowatts (kW) to 400 kW of power and are more tolerant of fuel impurities than polymer electrolyte membrane fuel cells. 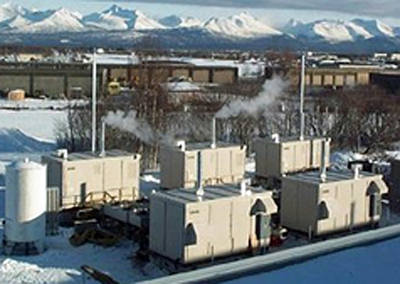 At the Anchorage mail processing center in Alaska, the United States Postal Service and the Chugach Electric Association worked together on one of the largest fuel cell projects in the world. In this project, five 200 kW phosphoric acid fuel cells were installed along with a unique software control package to run the units.

Molten carbonate fuel cells are currently used for electrical utility, industrial, distributed generation, and military applications. They operate at high temperatures (600°C to 700°C) and do not require an external fuel processor. Depending on system size, molten carbonate fuel cells can provide 300 kW to 3 megawatts (MW) of power and are well-suited for large applications. Alone they have an efficiency rate approaching 65% and when used in combined heat and power applications, the efficiency increases to 85%. 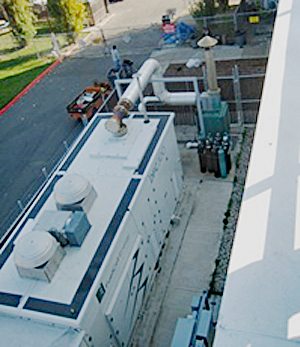 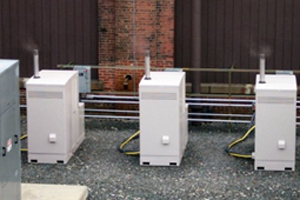 Solid oxide fuel cells operate at very high temperatures, between 700°C to 1,000°C (1,830°F). They are currently used in residential and commercial applications, providing 1 kW to 2 MW of power depending on the size. High-temperature operation removes the need for precious-metal catalyst and like molten carbonate fuel cells, enables internal reformation of fuels; thereby reducing the cost of the fuel cell system. High-temperature solid oxide fuel cells are being demonstrated for distributed generation, auxiliary power, and electric utility applications. 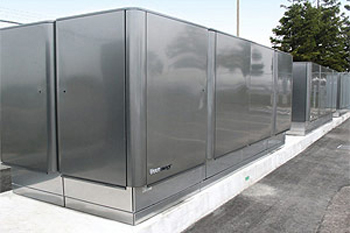 FedEx chose its Oakland, California, hub for an installation of five 100 kW Bloom Energy solid oxide fuel cells. Coupled with existing solar power at the site, the project provides reliable, continuous power and is expected to achieve a return on investment in five years.
Photo by Bloom Energy

An overview comparison of fuel cell technologies is available from the EERE Fuel Technologies Office as a fact sheet .

Fuel cell systems have a wide range of applications because they are fuel flexible and can be sized to accommodate energy needs. Stationary fuel cell power plants are typically used in distributed generation and combined heat (or cooling) and power, both critical and primary power applications.

The two best applications for stationary fuel cell systems are combined heat and power and critical backup power. In order to maximize the efficiency of a fuel cell system, utilizing the heat generated by the fuel cell stack as well as the electricity is important. The heat generated by a fuel cell can be utilized in building heating schemes though the use of hydronic loops and other means. In combined heat and power applications, the fuel cell system can be configured to follow either the heat or electrical load requirements of the site depending on end-user requirements.

Providing backup power for critical computer and communication systems is another common application for fuel cell systems. Fuel cell systems can be configured for grid-independent operation to provide continuous and seamless operation of critical systems in the event of an electrical grid failure.

Fuel cell applications only count toward Federal energy requirements when the hydrogen used with the fuel cell is generated from renewable energy sources. For Federal facilities, combining other renewable energy technologies, such as wind or photovoltaics, can provide renewable hydrogen and reliable power. These covered in other technology resource pages in this guide:

Site-specific economic analysis is critical for evaluating if a particular site is suitable for installation of a fuel cell system. Key factors include grid electricity costs, delivered fuel costs (typically natural gas), site load profiles, and availability of financial incentives. Two of the most important drivers for economic viability are: 1) the premium placed on backup and reliable power for a given facility, and 2) the spread in cost between natural gas provided to a facility and the cost of electricity purchased from the grid, otherwise known as the "spark spread".

For locations with relatively low natural gas costs and relatively high electricity costs, fuel cell systems will have a faster payback period and may provide a substantial additional revenue stream when net metering applies. NREL provides the Fuel Cell Power Model, a downloadable economic calculator, which can be customized to estimate costs for specific building applications, incentives, and utility rate structures. This model is available on the U.S. Department of Energy's (DOE) hydrogen analysis website. In addition, information on specific financial incentives for fuel cell systems can be found on the Database of State Incentives for Renewables & Efficiency® (DSIRE®).

Many fuel cell system manufacturers offer a variety of ownership, leasing, power purchasing agreements, and warranty options. End-user ownership of a fuel cell system requires the most responsibility for operation and maintenance (O&M) of the fuel cell system. Leasing arrangements typically require the end user to be responsible for fuel purchase and delivery along with lease payments, while the initial capital, installation, and maintenance costs are assumed by the leasing agent. Power purchasing agreements require the least amount of end-user responsibility with the power purchasing agreement agent handling the O&M costs while the end user agrees to purchase power from the agent. Fuel cell manufacturers can provide system-specific information on O&M costs.

The following are important special considerations for fuel cell systems.

A fuel cell that will be connected to the local utility grid must meet interconnection requirements of the local utility. Many states or localities have guidelines that require interconnection of many customer-owned power projects. Some guidelines limit the size of a project that can be interconnected or restrict the types of technologies that can be connected. A Federal agency should confirm early in the discussion with the utility if it can sign the utility interconnection agreement as there have been some cases where utility indemnification clauses prevented an agency from legally signing the agreement.

Rules also vary for net metering of interconnected systems, including availability of net metering, terms of the tariff, and the size of eligible systems. In some cases, the rules for fuel cells may vary from other energy sources.

The codes and standards for stationary fuel cells are relatively well defined. If the authority having jurisdiction is not familiar with these codes and standards, it may be beneficial to meet with them prior to submitting a permit application. This meeting would be an opportunity to provide a technology overview, explain how the project complies with all codes and standards, and answer any questions that they may have. Using published case studies that show examples of installations of the same technology may also be helpful while meeting with the authority. A Federal facility usually issues permits through the site fire marshal or another controlling authority.