Lighting controls have traditionally been used to create moods. Today, they are also used as part of a high quality energy efficient lighting system that integrates daylight and electric light sources to provide a comfortable and visually interesting environment for the occupants of a space. Electric lighting controls are appropriate for a wide variety of spaces, from restrooms to large open offices, from conference rooms to classrooms. They can be incorporated with daylighting to provide flexibility, energy savings, and ecological benefits. Although lighting controls are still most commonly used in commercial buildings, they are also increasingly being used in residential applications. 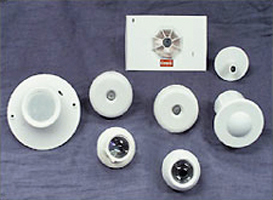 When electric lighting controls are used properly, energy will be saved and the life of lamps and ballasts can be extended. Lighting controls will help reduce energy by:

There are other reasons to use electric lighting controls. For example, dimming controls can provide the lighting flexibility which is often required in multi-use rooms or rooms in which projectors are used. Exterior motion detectors and interior occupancy sensors can be used to turn lights on when people (including intruders) are present. Moreover, by tuning an environment for the individual occupant's or group's visibility, comfort and productivity can be improved.

A. Types of Lighting Controls

The most common form of electric lighting control is the on/off "toggle" switch. Other forms of lighting control include occupancy sensors, daylight sensors, clock switches, a variety of manual and automatic dimming devices, and centralized controls. Some controls operate on line-voltage power, while others are low-voltage (DC) powered. Note that fluorescent fixtures that are intended to be dimmed require special compatible dimming ballasts. Also, controls can be linked together which can perform multiple control tasks.

Standard on/off switches and relays can be used to turn groups of lights on and off together. Creative design options can be developed with this simple tool, if the circuiting is properly designed. For example, some of the lamps in each fixture can be switched together, every other fixture can be switched as a group, or lighting near the windows can be turned off when daylight is plentiful. 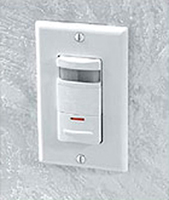 Some sensors have settings that allow the specifier to select between the functions listed above (manual on instead of automatic on, for example). Note that sensor characteristics may vary considerably from manufacturer to manufacturer, so it is important to carefully evaluate the options for each device.

Passive infrared sensors (PIR) are triggered by the movement of a heat-emitting body through their field of view. Wall-box type PIR occupancy sensors are best suited for small, enclosed spaces such as private offices, where the sensor replaces the light switch on the wall and no extra wiring is required. PIR sensors cannot "see" through opaque walls, partitions, or windows so occupants must be in direct line-of-site of the sensor.

Ultrasonic sensors emit an inaudible sound pattern that is disrupted by any moving object altering the signal returning to the sensor (Doppler shift). They are best suited for spaces where line-of-sight view to the occupant is not always available. This type of sensor detects very minor motion better than most infrared sensors and is often used in restrooms since the hard surfaces will reflect the sound pattern.

Dual-technology occupancy sensors use both passive infrared and ultrasonic technologies for less risk of false triggering (lights coming on when the space is unoccupied). Combining the technologies requires a more reliable, yet slightly larger and more expensive device. 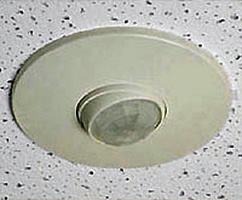 Example of a ceiling-mounted occupancy sensor

Occupancy sensor placement is very important to the successful implementation of the control design intent. Occupancy sensors must be located to ensure that they will not detect movement outside of the desired coverage area, through an open doorway, for example. Ultrasonic devices are sensitive to air movement and should not be placed near an HVAC diffuser, where air movement may cause false tripping.

Occupancy controls can be used in conjunction with dimming or daylight controls to keep the lights from turning completely off when a space is unoccupied, or to keep the lights off when daylight is plentiful and the room is occupied. This control scheme may be appropriate when occupancy sensors control separate groups of luminaires, or "zones", in a large space, such as in a laboratory or an open office area. In these situations, the lights can be dimmed to a predetermined level in one specific area when the space is unoccupied.

There are several different kinds of coverage patterns and mounting configurations for occupancy sensors, such as:

Additionally, take note of the difference between each device's sensitivity to minor motion (working at a desk) vs. major motion (walking or half-step activity). The sensor manufacturer should provide coverage diagrams for both levels of activity. HID lamps do not work well with occupancy sensors because most HID lamps take a long time to start each time they are switched off.

Manual dimming gives occupants of a space an added degree of control and satisfaction, as well as an opportunity to save energy. It provides users with the flexibility to instantly change the characteristics of a space to make it a more comfortable and productive environment. There are several families of manual preset dimming control.

Manual hard-wired control consists of a dimmer, connected to a single luminaire or zone which is operated by the user at the device. Preset scene dimming controls change the light level settings for multiple zones simultaneously at the press of a button.

Remote control dimming is another form of manual dimming that is well suited for retrofit projects to minimize rewiring. Infrared and radio frequency technologies are most successful in these applications. Remote infrared control operates in a similar fashion to other infrared technologies like television, for example. Radio frequency controls are equipped with a sender that "talks" to other dimmer's receivers. This allows multi-zone control from a single-zone device. Personal control systems are now available that allow users to change levels of lighting, sound, heating/cooling, etc., in their own workspaces. See also WBDG Productive—Design for the Changing Workplace.

Light-level sensors or photosensors can be used to automatically turn lights on or off, or dim them, depending on the available daylight available in the space. Daylight dimming can maintain the desired light level while providing a smooth, barely noticeable transition to or from electric lighting as daylight increases or decreases.

Clock switches turn lights on or off for a specific period of time. They are especially useful for turning off photocell-activated exterior lighting late at night (as long as that lighting is not needed after a certain time).

Centralized controls can be used to automatically turn on, turn off, and/or dim lighting at specific times or under certain load conditions. This type of control can be used in a conference room or on a building-wide scale. Centralized control strategies can also integrate lighting controls with other building systems such as mechanical or security systems.

Distributed controls are based on digital communication protocols. These systems are local, or integral, to the luminaire itself, not housed in a central cabinet or enclosure. They integrate with building automation or energy management system. A Digital Addressable Lighting Interface (DALI) system provides a means of control which can speak to an individual ballast or groups of ballasts. The "control wiring" is independent of the "power wiring" and provides the highest degree of flexibility available at this time. When space configuration or occupant needs change, the system can respond by reassigning the ballasts accordingly.

B. Selecting the Appropriate Lighting Controls

There are many guides and services available for designing lighting control systems. Some controls manufacturers will actually do a controls layout on the building plans or even on electronic drawing files, free of charge or for a nominal fee. If you prefer to do the controls layout yourself, it is advisable that you provide a written "sequence of control" which describes the design intent and a "performance specification" which describes the performance characteristics of individual components. Further, some coordination with the selected controls manufacturer will help to avoid surprises during construction and commissioning.

If you know how you would like the controls scheme to work, but you are not sure what equipment to choose or how it should be connected electrically, explain your ideas to the manufacturer's technical support personnel. Chances are they will be able to help you work out the details.

The table below provides control ideas for several different room types and usage patterns. Some additional links to help on manufacturers' web sites are provided below the table.

Commissioning is defined as the final adjustment, calibration, and tuning of the various components after they have been installed and the space is occupied. This process requires the participation of the building owner, a commissioning agent, the lighting designer, the electrical engineer, a manufacturer's representative, and building maintenance personnel.

Commissioning activities will vary from space to space. They can range from simply "burning in" fluorescent lamps that are to be dimmed to configuring software to respond to weekday, weekend, and holiday occupancy schedules.

Commissioning is often considered impractical, too burdensome, or costly. However, manufacturers of lighting controls are continuously improving their devices to help simplify and expedite the process. When commissioning is completed, the building maintenance personnel must be provided with all relevant documentation required for the ongoing maintenance of the lighting control system.

Lighting controls are cost-effective, especially when one considers long-term life-cycle costs along with initial costs. Lighting controls can add approximately $0.50-$1.00 per square foot initially. Payback periods vary widely by project and are difficult, at best, to predict accurately. That does not take into account the savings from reduced energy use and HVAC reduction.

The easiest way to do an economic analysis of lighting controls is to use an "effective energy charge (EEC)," which is a cost per kWh number derived by dividing the entire electricity bill (in dollars) by the total amount of energy used during that billing period (in kWh). The potential savings per controlled fixture is calculated as follows:
$ Savings per year = ([Wb x HPYb x PFb] — [Wf x HPYf x PFf]) * (EEC) * (1 kWatt/ 1000 Watts)

This method of calculating annual dollar savings is an approximate estimate because is does not allow you to calculate the exact changes in demand charges—demand charges have been wrapped up into the "effective energy charge."

Electric lighting controls can be used in all types of buildings and spaces. Some case studies are detailed below: