Throughout a project's planning, design, construction, and operations and maintenance phases, Cost Estimating is employed as one of the main tools of successful Cost Management. Once an initial budget has been established, it is important to test its assumptions by employing a series of increasingly precise cost estimating techniques that coincide with further development of design and construction details. A sound understanding of the most common types of estimates, tools for estimating, historical database sources, and formats of estimates forms the basis of the more sophisticated methods of estimating. Estimating is typically concerned with the initial costs—or first costs—of accomplishing new construction or renovation projects, although it also plays a large part in life-cycle costing of design alternatives. The estimates should be provided by a professional estimating firm either as part of the design team, or directly for the owner. In many instances the latter is preferred to ensure the independence of the estimate.

A key component of any cost-estimating effort is to establish the framework, or format, within which the project costs will be distributed, often referred to as a Work Breakdown Structure (WBS). There are a variety of estimating formats used today, but the two most commonly used are MasterFormat and Uniformat. MasterFormat, often referred to as CSI MasterFormat™, currently provides WBS into 16 trade/materials based divisional categories (in the process of being expanded to 49 divisions). Uniformat represents WBS costs according to a hierarchy of system elements, and is supported through various organizations, e.g. the U.S. General Services Administration and CSI. Although different in their system headings, each provides a hierarchical WBS by systems. MasterFormat™ is widely used within the design and construction industry when estimating for Construction Document design phases, as it aligns well with MasterFormat specification sections. On the other hand, Uniformat-based estimating is often used in providing planning stage and early design phase estimating, where take-off measurements do not readily allow MasterFormat databases to be applied. In either case, the key to successful estimating is whether accurate cost data is available (through databases or other sources) that enable WBS quantities to be applied. Key also is whether WBS categories enable effective cost management, associated with the ability to compare current estimate breakdowns to previous estimate components—having lineage back to the project's programmed budget.

Preliminary Estimates. Early in the planning stages, both building owners and designers must agree on an anticipated cost of the project at bid award. Preliminary Estimates are employed in the early planning phases of a proposed project to match an owner's needs, expressed as written programmatic requirements, with budget constraints in order to establish its overall scope (size) and quality expectations. The WBS recommended at this stage is a systems-based format, where elements of the building (e.g. exterior closure) are the method of categorization. Estimate comparisons at this stage are especially valuable in evaluating the feasibility of strategic alternatives being considered to satisfy current and projected space requirements (e.g. new construction versus renovation, or lease space). As the design is not fully developed at this stage, a design contingency is typically included, typically between 10–15%. Issues which need to be identified at this juncture include method of procurement being considered, location market factors, specific site constraints or challenges, proposed phasing plans, and start and finish dates. It is recommended that a formal risk analysis be carried out at every stage in the design, but particularly in the planning stage when proactive steps can be taken to mitigate identified risks.

Intermediate Estimates. After proceeding with a preferred course of action, Intermediate Estimates are employed at various stages of project design development to maintain accountability for initial budget projections and as a means of evaluating competing alternative construction assemblies, systems, and materials. On large projects it is common practice for an owner to employ a construction manager or professional estimator to continually update project estimates and provide feedback on budget impacts of decisions on major design elements. The estimates will typically still be in a Uniformat systems WBS , however a summary/conversion may also be provided in CSI MasterFormat. The risk assessment should be updated and a contingency factor calculated depending on the outcome of the risk analysis. As the design progresses and risks are mitigated, the design contingency can typically be reduced.

Many owners employ Earned Value Analysis cost management practices as the design progresses, to determine if the project is on track according to both schedule and budget. This can be as straightforward as tracking costs across building systems (e.g. the mechanical system) or can be more mathematically based to forecast the final outcome of the project.

Final Estimates. As the design is completed a detailed pre-bid estimate can be prepared. At this stage the design contingency would typically be reduced to zero: however, in some instances, there will still be risk surrounding the project, which would make it prudent to still include a small bidding contingency. The estimate should be organized in the same WBS as required of the bidders, which typically is CSI MasterFormat™. This then allows for a comparison of the final estimate with the bids received and can aid in negotiating with the lowest bidder. In addition, having the final estimate and bids in the same format facilitates developing cost databases for use in planning future projects. This typically means taking a CSI bid and re-sorting the data into a Uniformat WBS.

There are four primary methods used to estimate construction costs. Those methods are known as Project Comparison Estimating or Parametric Cost Estimating, Area & Volume Estimating, Assembly & System Estimating, and Unit Price & Schedule Estimating. Each method of estimating offers a level of confidence that is directly related to the amount of time required to prepare the estimate (Fig. A).

Project Comparison Estimating or Parametric Cost Estimating is often used in early planning stages when little information is known about the program other than overall project parameters. This method is sometimes called a "preliminary" or "ballpark" estimate and has no better than 15% to 25% accuracy. Project comparison estimating uses historical information on total costs from past projects of similar building type. For example, the number of beds in a hospital, or number of spaces in a parking garage, or number of courtrooms in a courthouse can form the basis of a project comparison estimate by comparing them to similar scope projects recently done in the same geographic region.

This estimating method requires the assumption of an approximate gross area for the proposed work and a sufficient historical record of similar building types. The greater the number of prior project combinations for which scope and prices are known, the easier it is to perform Project Comparison Estimating. Fig. B illustrates an example of regression analysis used to develop a project comparison estimate. The scattered points in the figure show the combinations of overall project size and cost. The line shown is the "best fit" of a linear relationship between size and construction cost and may serve to predict a preliminary budget. The distances between the line and the points give a visual impression of the statistical confidence of the estimate. 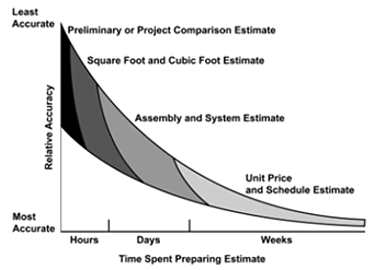 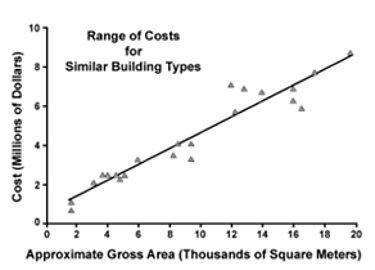 Fig. A: Relative accuracy of estimate types.
Courtesy of: From Concept to Bid...Successful Estimating Methods by John D. Bledsoe

Fig. B: Project relative accuracy of estimate types.
Courtesy of: From Concept to Bid...Successful Estimating Methods by John D. Bledsoe

Square Foot and Cubic Foot Estimates are another method of developing both preliminary and intermediate budgets based on historical data. This method is effective in preparing fairly accurate estimates if the design is developed enough to allow measurement and calculation of floor areas and volumes of the proposed spaces. There are several historical databases available to support this method of estimating providing unit costs ($/S.F. & $/C.F.) that are adjusted annually and many of the large estimating firms maintain their own databases. More accurate estimates made with this method make adjustments and additions for regional cost indices, local labor market rates, and interpolation between available cost tables. Further adjustments may be made to account for other unique aspects of the design such as special site conditions or design features being planned. In addition, the estimate can develop overall "core and shell" costs along with Tenant Improvement build-out costs of different space types, allowing for relative ease of determining the impact of changes to the program. Estimates made with this method can be expected to be within 5% to 15% accuracy.

Assembly and Systems Estimates are intermediate level estimates performed when design drawings are between 10% and 75% complete. Assemblies or systems group the work of several trades or disciplines and/or work items into a single unit for estimating purposes. For example, a foundation usually requires excavation, formwork, reinforcing, concrete—including placement and finish—and backfill. An Assembly and Systems estimate prices all of these elements together by applying values available in assemblies cost data guides. These guides are based on historical databases, typically organized in MasterFormat™. Estimates made with this method can be expected to be within 10% accuracy.

In Unit Price and Schedule Estimating, the work is divided into the smallest possible work increments, and a "unit price" is established for each piece. That unit price is then multiplied by the required quantity to find the cost for the increment of work. This calculation is often called "extending". Finally, all costs are summed to obtain the total estimated cost. For example, the cost to erect a masonry wall can be accurately determined by finding the number of bricks required and estimating all costs related to delivering, storing, staging, cutting, installing, and cleaning the brick along with related units of accessories such reinforcing ties, weep-holes, flashings, and the like. This method of estimating provides the most accurate means of projecting construction costs, beyond which accuracy is more likely to be affected by supply and demand forces in the current market.

There are several historical databases available that provide current values for estimating costs of the various units of work for a project. The databases are compiled from records of actual project costs, and on-going price quotations from suppliers, and are published annually in the form of books, CDs, and computer-based extranets. There is however a danger of applying published data or software database pricing without first adjusting for the particular aspects of the project under consideration. In construction every project is unique, with a distinct set of local factors (such as size of project, desirability, level of competition, flexibility of specifications, work site, and hour restrictions, and so forth) that come into play in bidding. When an estimating system is used that is attached to a price database, the professional estimator should still review each line item price to determine if it is applicable to the project being estimated. Blindly applying database prices can lead to inaccurate estimates and bid busts.

Location factors should also be applied only after first considering the project size and particular nature, to determine where the bidders will come from. If it is a large project in a small town, the location factor for that town likely will not apply as the bidders will be coming from elsewhere. The bids may as a result be much higher than the factor would indicate as the wages will be based on another location and the bidders may have to pay accommodation and travel costs for some of their workers.