by Alex Fields
Combined Heat and Power Alliance, formerly known as the Alliance for Industrial Efficiency

Combined heat and power (CHP), or cogeneration, is the simultaneous generation of useful mechanical and thermal energy in a single, integrated system. CHP can be configured as a topping or bottoming cycle. In a typical topping cycle system, fuel is combusted in a prime mover, such as reciprocating engines, combustion or gas turbines, steam turbines, microturbines, or fuel cells, which drives the overall system to generate electricity. In a bottoming cycle system, also referred to as "waste heat to power," fuel is combusted to provide thermal input to a furnace or other industrial process and heat rejected from the process is then used for electricity production.

CHP involves the recovery  of otherwise-wasted thermal energy to produce useful thermal energy or electricity. This can significantly increase industrial efficiency and decrease unnecessary fuel consumption. CHP already has a large presence in the U.S., with 4,300 installations in all 50 states and 130 GW of remaining technical potential for electricity generation . Additionally, CHP is recognized for its potential to significantly reduce carbon emissions and to reliably generate power, even during emergency situations. Although CHP represents a significant up-front investment, it can pay for itself within a few years. 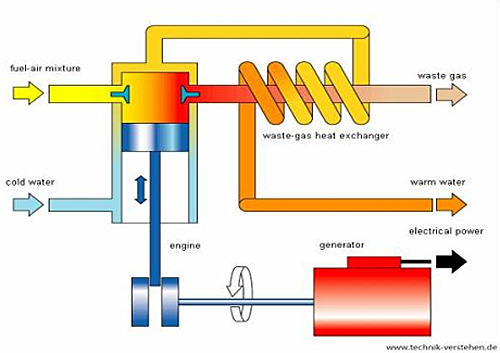 A. Types of CHP Prime Movers:

B. Features of CHP Technology

The installed cost for most CHP technologies consists of the total equipment cost plus installation labor and materials, engineering, project management, and financial carrying costs during construction.

Start-up times represent how long it takes CHP units to get online and be able to provide electricity and thermal output. Start-up times for the five CHP technologies described above can vary significantly depending on the technology and fuel used.

Availability indicates the amount of time a unit can be used for electricity and/or steam production. Availability generally depends on the operational conditions of the unit.

The ability to produce useful thermal energy from exhaust gases is the primary advantage of CHP technologies. This value is equivalent to the gross useful thermal output of the CHP system minus the thermal input.

CHP systems are major investments. For instance, a 1 MW reciprocating engine system for a hospital might have a capital cost of around $1.6 million. The cost of a CHP system depends on the complexity of its secondary features, such as heat recovery and emissions monitoring systems. Generally, costs for CHP per kilowatt of capacity decrease as size increases. Given the efficiency gains from CHP, however, some analysts estimate that it can be implemented at a negative cost because cost savings from reduced fuel expenditures will outweigh capital and other project costs over the life of the system.

Despite its high initial costs, CHP is cost-effective and offers a variety of long-term economic benefits:

CHP can substantially reduce emissions of carbon dioxide and air pollutants like nitrogen oxide, sulphur dioxide and volatile organic particles. By using the fuel's energy twice, CHP yields one-half to one-third of the emissions of the separate generation of heat and power. According to the U.S. Department of Energy, meeting the Agency's goal to double U.S. installed capacity to 40 GW by 2020 would reduce annual greenhouse gas emissions by at least 150 million metric tons of carbon. CHP also avoids emissions associated with conventional power plants, which are responsible for two-thirds of the nation's annual sulfur dioxide emissions, one-quarter of the nitrogen oxide emissions, one-third of the mercury emissions, and one-third of the carbon dioxide emissions. These emissions contribute to serious environmental problems, including global climate change, acid rain, haze, acidification of waterways, and eutrophication of critical estuaries.

CHP systems are relatively small and widely distributed. Because they are located at the point of use, they are not vulnerable to a disruption of the transmission system and can provide emergency power in the case of an outage due to extreme weather events. CHP systems are independently fueled and operated. While such systems can be centrally dispatched, they can also be operated effectively in the event of a disruption to central systems if specially configured for "islanding."

Combined heat and power is an efficient and clean approach to generating power and thermal energy from a single fuel source. The average efficiency of fossil-fueled power plants in the United States is 33 percent, and has remained virtually unchanged for four decades. This means that two-thirds of the energy entering the system is lost as waste heat. However, CHP systems typically achieve total system efficiencies of 60 to 80 percent. Because CHP is more efficient, less fuel is required to produce a given energy output than with the separate production of heat and power.

As an efficiency  technology, CHP helps makes businesses more competitive by lowering their energy costs, reducing demand on the electricity delivery system, and reducing strain on the electric grid. Such on-site generation avoids the transmission and distribution losses associated with electricity purchased via the grid from central stations and defers or eliminates the need for new investment. CHP's inherent higher efficiency and elimination of transmission and distribution losses from the central station generator, results in reduced primary energy use and lower GHG emissions. CHP can provide overall energy and CO2 savings on par with comparably sized solar PVs, wind, and natural gas combined cycle (NGCC), and at a capital cost that is lower than solar and wind and on par with NGCC. 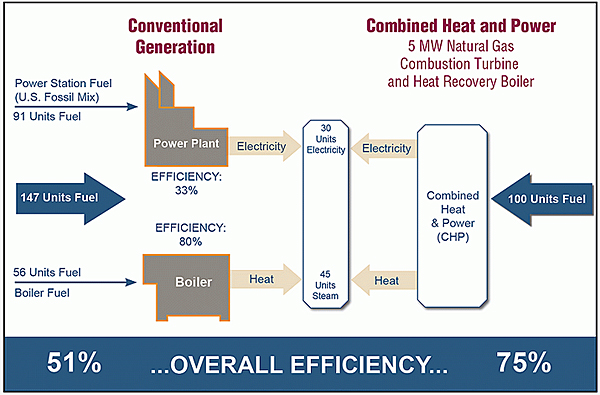 Commercial buildings used over 16 quadrillion BTUs of energy in 2000—equivalent to the annual gasoline consumption in the U.S. There is great potential for CHP in large commercial office buildings, supermarkets, hotels, restaurants, and large retail markets. Mixed-use developments are an emerging market for CHP, especially due to the clean, reliable on-site power they provide. Recent ICF projections  predict equal technical potential of 65 GW in the industrial and commercial/institutional sectors.

Hospitals are excellent candidates for CHP because they have high electrical and thermal energy needs and because reliability is critical. A 2 MW gas turbine CHP system can provide annual O&M savings of more than $400,000. Also, CHP enhances the quality of power by assuring smooth operation of clinical devices.

District energy systems may be installed at large, multi-building sites such as universities, hospitals, airports, and government complexes. District energy systems are a growing market for CHP because they significantly expand the thermal load potentially served by the system. District energy also has a major added benefit of reducing the requirement for size and capital investment in production equipment due to the diversity of consumer loads, enabling more cost-effective CHP. 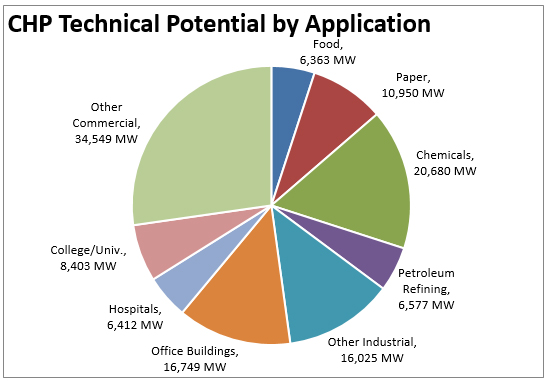 Since CHP does not depend on central power, it reduces revenue for many investor-owned utilities where business models link sales to cost recovery and revenues. Utility tariff structures and standby rates directly affect onsite CHP generation. Similarly, interconnection processes can delay projects and require costly studies or onerous technical specifications to develop and install a system.

Because CHP equipment requires substantial upfront costs and has a long life (exceeding 20 years), potential hosts must make a long-term financial commitment. Energy efficiency is maximized when a system is sized to match a facility's thermal load. This often results in more power than the host site needs. In some jurisdictions, this excess power production can be sold to the grid, but raises questions about long-term electricity pricing.

CHP installations must comply with many local zoning, environmental, health, and safety requirements. This requires interaction with a number of local agencies, including fire districts, water districts, and planning commissions, which are largely unfamiliar with CHP. While CHP systems reduce regional emissions because the facility now produces electricity, on-site emissions will increase, which may prevent hosts from pursuing projects.