by the Alliance to Save Energy

Much progress has been made on improving building energy efficiency over the past decades by focusing on the efficiency of individual building components (i.e., appliances and equipment) and, more recently, the efficiency of the building as a whole. As a middle ground between component and whole-building efficiency, a building systems approach considers the interactions of components within and among building systems, as well as interactions among multiple buildings, and between the building and the electric grid. Adopting a systems perspective will become increasingly necessary to achieve meaningful and cost-effective future energy savings within the built environment.

In addition to improving energy performance, a systems approach has the potential to achieve significant non-energy benefits: reduced carbon emissions (commercial buildings alone account for about 18 percent of direct and indirect greenhouse gas emissions), improved grid reliability , water savings , and extended equipment life and increased occupant comfort and productivity . The quantifiable non-energy benefits have been estimated to range from 25 to 50 percent of the total benefits of energy efficiency across all sectors.

A building system is a combination of equipment, operations, controls, accessories, and means of interconnection that use energy to perform a specific function. Examples include HVAC, water heating, lighting, thermal envelope, and miscellaneous electrical load systems.

The Case for a Systems Approach

Improving the efficiency of building systems will support the WBDG objectives for sustainable, cost-effective, functional, and secure/safe, whole-building design and operation.

(Optimize Energy Use for Sustainability Objective)

Despite decades of improvement in equipment efficiency, the overall energy use of U.S. commercial buildings continues to increase. Energy intensity (energy/floor area) has been declining but not fast enough to offset floor space growth - due in part to the rapid increase in miscellaneous loads, which also create additional cooling loads. By 2035, miscellaneous end-uses are projected to use as much energy as all other building end-uses combined. The combination of these new loads and growing floor space means that new approaches to efficiency will be needed to stem overall growth in building energy use. Optimizing performance at the systems and multi-systems level offers one promising path forward.

Examples of energy savings potential include:

Highly efficient components do not necessarily result in an efficient building. Optimized building efficiency requires consideration of the interactions among components and with the building.

Emerging opportunities for attaining significant efficiency gains-such as through the integration of smart grid connectivity and related control technologies-are optimally applied at the system level. Buildings-to-grid integration can enhance grid reliability. Conversely, when a grid outage does occur, systems such as passive solar design, natural ventilation, daylighting, thermal storage, and on-site generation coupled with battery storage allow a building to remain functional and habitable for an extended period. 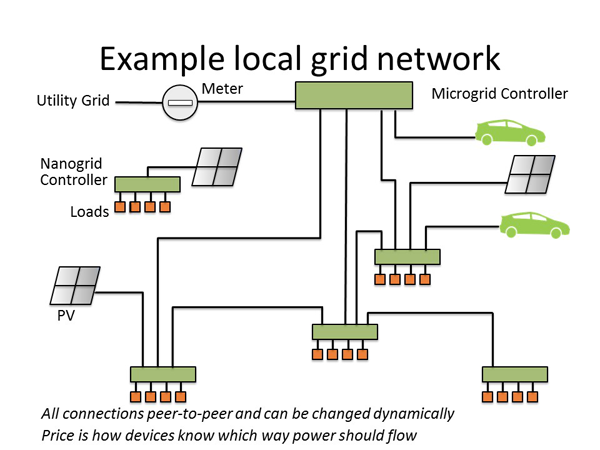 Several building systems can reduce energy consumption through improved controls , thermal exchanges, and multi-systems integration. While these measures may be easier to apply to new construction and major renovations, the majority of savings potential lies in changes to existing buildings. Opportunities for systems solutions in existing buildings are often associated with control systems installation or upgrades, interior renovations to accommodate new tenants, and end-of-life replacement of HVAC and other mechanical systems. Following are some examples of system efficiency measures:

Energy used for lighting represents about 10 percent of commercial building electricity use. As defined by NEMA, an optimal lighting system is "a collection of luminaires and related lighting equipment installed in an application to provide the right amount of light where and when needed, with consideration of human comfort, visibility, safety and security, the physical environment, and daylight integration." Although energy efficient lighting components are critical, effective lighting and daylighting system design and controls can add significant energy savings. A lighting controls study in two GSA federal office buildings with updated LED lighting resulted in measured savings of 32-33 percent of lighting energy.

Energy used for HVAC&R systems represents over 50 percent of commercial building electricity use. HVAC&R systems (space cooling, space heating, ventilation, and refrigeration) are by far the largest users of energy in commercial buildings. In order to Optimize Energy Use, designers must consider specifying efficient HVAC systems, including efficient water— or air—based distribution, variable—speed controls, demand—based ventilation and heat or enthalpy recovery. Many potential sources of low-level heat, such as heat rejected from HVAC or refrigeration systems or from telecom and server rooms, could be captured for beneficial use in pre-heating hot water systems or to condition outside ventilation air.

Building designers should prioritize the design of hot water distribution systems (e.g., pipe layout and the location of the heating system relative to points of use) to minimize the total heat lost while serving the load.

Shifting to a systems approach that considers additional factors such as drivetrains, inverters and electronic drive controls—as well as the choice of motor—driven system components (e.g., for pumps and air—handlers)–has the potential to substantially increase the efficiency of the total motor system.

"…the amount of energy savings from replacing an individual device often does not justify the replacement cost. As a result, there is a need for developing overarching technological solutions that can achieve crosscutting reductions in energy consumption at minimum cost. Instead of targeting individual MELs, R&D advancements require going up one level (to systems of MELs) or down one level (to common MELs components)".

Strategies to reduce MELs include:

To maximize whole-building efficiency we must recognize that buildings are made up of multiple systems and optimize their integrated performance. Integrated systems provide the controls and feedback needed for buildings to operate at peak efficiency.

As a multi-systems strategy, direct current power distribution within a building can reduce energy demand as well as contribute to grid balancing, expanded control options, and improved safety and reliability. DC distribution can deliver systems-oriented energy savings for lighting, MELs, and many HVAC&R components by: 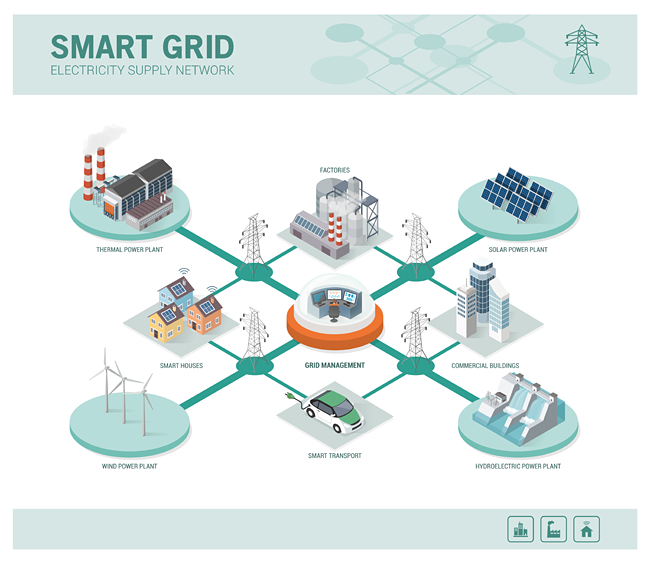 Emerging opportunities for attaining significant efficiency gains-such as through the integration of smart grid connectivity and related control technologies-are optimally applied at the system level.

A Building Integrated Photovoltaics (BIPV) System is one example of an opportunity for DC distribution. Implementation of a BIPV system in combination with energy storage has the potential to reduce a building's billed energy charges by 42% – and DC distribution can provide further savings by avoiding multiple DC/AC/DC conversions.

Better integration of energy systems applies both within and outside the building boundary. Examples include Combined Heat and Power (CHP), District Energy Systems, and Buildings-to-Grid Integration.

CHP systems have the potential not only to save energy and reduce building operating costs but also to enhance building operational resilience and grid reliability ("Valuing Resiliency: How Should We Measure Risk Reduction?"). In addition to the potential direct energy savings from CHP (such as doubling the useful energy products derived from fuel used, there are three categories of CHP "resilience value": 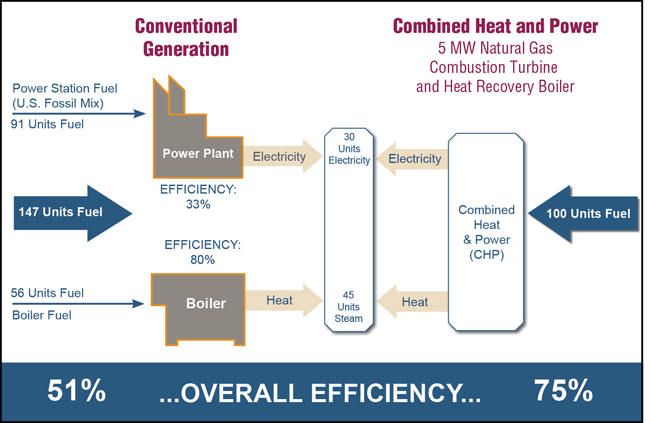 District energy systems can often improve energy productivity and energy diversity while reducing GHG emissions. According to the UN Environment Program, DES can reduce heating and cooling energy in urban buildings by as much as 30-50 percent . District energy is intrinsically open to diverse fuel sources on the thermal side; when combined with CHP it can diversify the source of both electricity and heat. DES systems can also be readily incorporate ice storage tanks to offset peak demands or to make better use of surplus generation from intermittent wind and solar resources. For the estimated 290 district energy systems in the U.S. that do not currently use CHP, conversion to CHP represents a tremendous opportunity for efficiency improvement .

Current metrics and regulations typically address rated equipment efficiency or whole-building performance as designed, but most do not address actual performance of equipment or buildings as installed and operated - although recent initiatives on outcome-based performance pathways represent a promising new direction.

With about 5.6 million commercial buildings as of 2012 with expected lifetimes of several decades, it is clearly important to develop system-oriented retrofit strategies for the existing building stock as well as new construction. In existing buildings, integrated system retrofits can be implemented through a variety of approaches. These include:

As discussed above, efficiency gains in systems within the building (HVAC &R, lighting, MELs, etc.) and those outside the building such as CHP and DES all represent opportunities to reduce stress on the utility grid during peak demand periods and in case of unforeseen generation, transmission, or distribution outages, thereby enhancing the grid's reliability and resiliency. Emerging opportunities for Building-to-Grid (B2G) Integration offer the prospect of improved operational savings and reliability on both sides of the meter.

The evolution of a fully integrated, transaction-based building-grid and ecosystem will create new opportunities for optimizing system efficiencies, reliability and cost-effectiveness at both the building and grid scale, while paving the way for more effective integration of renewable resources and electric vehicles.