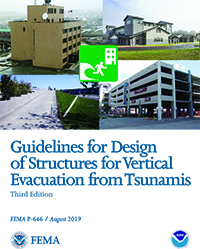 This publication presents the following information:

This is the third edition of FEMA P-646, originally published in June 2008. In this third edition, revisions were made throughout the document, but particularly in the following areas:

This third edition builds on the second edition, which included observations and lessons learned from the March 11, 2011 Tohoku tsunami; revised and enhanced the debris impact expression to remove over-conservatism in the prior edition; and updated reference documents to the most current versions.

This report is intended as a resource for state and local government officials, community planners, engineers, architects, building officials, emergency managers, tsunami planning activists, and building owners who are considering the construction and operation of tsunami-resistant structures that are intended to provide a safe haven for evacuees during short-term, high-risk tsunami events. It provides guidance on the planning, location, operation, design, and construction of structures that could be used as a refuge for vertical evacuation above rising waters associated with tsunami inundation. Much of the information contained in a report originally published as a companion to the first edition, FEMA P-646A, Vertical Evacuation from Tsunamis: A Guide for Community Officials (FEMA, 2009) has now been incorporated directly into this third edition.