For many historic structures, building systems are new additions that must be incorporated with as much sensitivity to the original fabric as possible.

Careful planning is required to balance preservation objectives with interior systems, such as HVAC, electrical, plumbing, structural systems, information and communication technologies, and conveyance systems. Since new mechanical and other related systems, such as electrical and fire suppression, can use up to 10% of a building's square footage and 30%–40% of an overall rehabilitation budget, decisions must be made in a systematic and coordinated manner. While it might not be possible to always completely conceal the presence of new technology, it may be possible to lessen the impact on a building's integrity and retain as much of the original building fabric as possible. 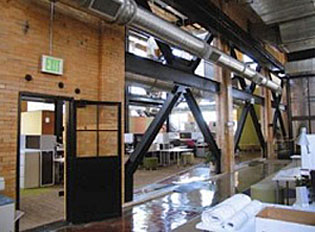 Exposed spiral ductwork is appropriate in this industrial interior. This treatment is not appropriate in more finished interiors, where plaster covers walls and ceilings.
Photo Credit: National Park Service

However, more recently constructed buildings, such as early 20th century commercial buildings, may contain early systems that may be historic themselves and can be reused. For example, decorative ventilation grilles and switch plates may contribute to a building's significance as much as marble wainscoting or decorative stenciling.

The interior character of a historic building should be respected when installing new systems. For example, in a finished interior—i.e. one with plaster on the walls and ceilings, such as a house, office building, hotel or apartment building—new systems and ductwork should be concealed in attics or basements, or placed in boxed soffits. In industrial interiors—i.e. a warehouse or factory—these features may be exposed.

Changes—both big and small—can have a significant cumulative impact over time. Care must be taken during initial project design and periodic upgrades to avoid the incremental loss of integrity. Following are four basic principles to keep in mind when upgrading systems in historic properties:

During the initial design phase, preservation zones are defined within the individual preservation management plan, giving a hierarchy of significance to the building's spaces and features (i.e., primary, secondary, and tertiary spaces). An understanding of the building's most important spaces and features is critical to evaluating preservation trade-offs and preserving character-defining qualities. It is better to install new equipment in secondary or tertiary spaces, and avoid or minimize intrusions in primary architectural spaces. Basements and attics are usually good locations for horizontal routing of systems; existing chases such as fireplaces, flues, and utility closets are good for vertical routing of systems; and use existing penetrations and chases to the greatest extent possible. Also, janitorial closets can be good locations for electrical equipment. Where possible, use this opportunity to improve on the placement and function of a building's systems so as to emphasize the building's integrity.

Be aware that some basements may themselves be historically significant because of prior use, storage, or other factors, not necessarily related specifically to the building containing the basement. Also basements excavated prior to the NHPA might have intruded into significant archaeological sites, so ground disturbances due to new utility trenches, exterior waterproofing, installing French drains, etc. must be subject to Section 106 consultations, either as part of the building undertaking or as separate undertakings.

A. HVAC—Heating, Ventilation, and Air-Conditioning

Choose a system and/or equipment that is appropriate for the use of the building. For instance, a museum has different climatic needs than an office building. Encourage collaboration between preservation specialists and design engineers to analyze potential thermal benefits of historic buildings when making systems design decisions. Consider energy modeling the historic building at the early stages of design utilizing digital software. Analysis of existing historic envelope assemblies may reveal inherent advantages modern buildings lack. In particular, mass masonry walls can provide diurnal thermal load reductions. This approach can result in a more appropriate design of mechanical systems, potentially reducing unbalanced heating and cooling. In addition, energy modeling may also show mass masonry walls that require special attention associated with modified drying potential that could result in adverse effects. It is increasingly important to develop understanding of the existing historic fabric ahead of designing to meet requirements of building rating systems and energy code requirements. 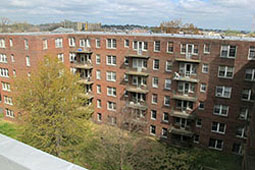 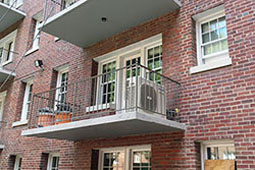 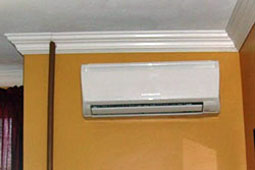 In this large apartment complex in Washington, DC they used a "split ductless" HVAC system. The only evidence of this mechanical installation are small, simple indoor air handlers in apartments (mounted on walls—a different type of unit is used for ceilings—not shown here) and small condenser units placed on rear balconies that face a utilitarian courtyard. This system is relatively expensive, but it has limited physical or visual impact on the historic interior or exterior because ii requires no ducts. 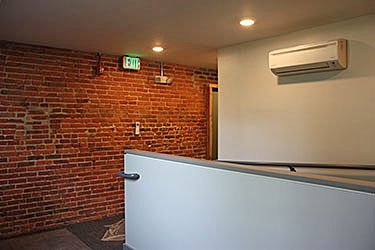 Another example of a "split ductless" HVAC system air handler inside of a mill. 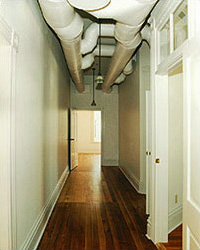 To preserve the distinctive decorative pressed-tin ceiling on the interior of this finished late 19th-century commercial building, spiral duct work was left exposed. This approach was taken because in this instance, it would be more intrusive to add a boxed soffit. The exposed duct was painted the color of the walls to lessen its impact. Depending on the circumstances, painting the duct the color of the ceiling may work as well. It was also placed at the perimeter of the room, so the important open retail space was not subdivided, and was installed close to the ceiling, so this new feature does not appear more prominent as it hangs down. This solution meets the Secretary's Standards.
Photo Credit: Audrey Tepper

A good example of ductwork installation does not lower ceilings in public corridors or obscure windows or transoms.
Photo Credit: National Park Service

A bad example of ductwork installation obscures either windows or transoms or both.
Photo Credit: National Park Service 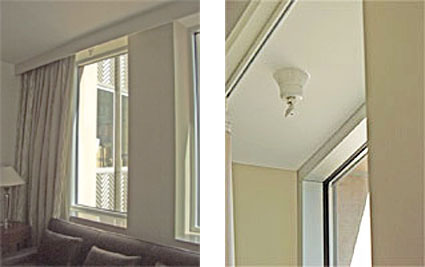 Former bank building (now a hotel), Minneapolis, Minnesota. When an exterior wall of a building is 5' or closer to an adjacent building, fire exposure may come from either the inside or the outside of the two buildings. Therefore, fire separation in some form must be provided. In order to retain the window opening, rather than infilling to achieve code compliance, a sprinkler head was installed at the window to ensure proper safety.
Photo Credit: National Park Service 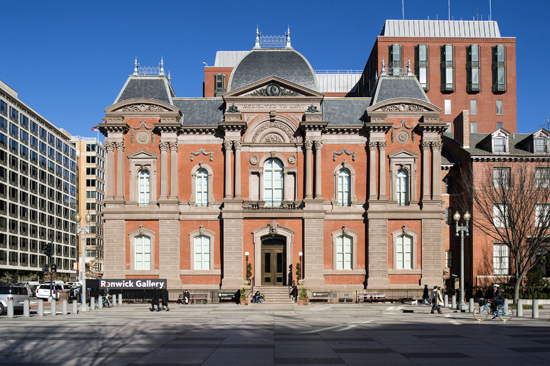 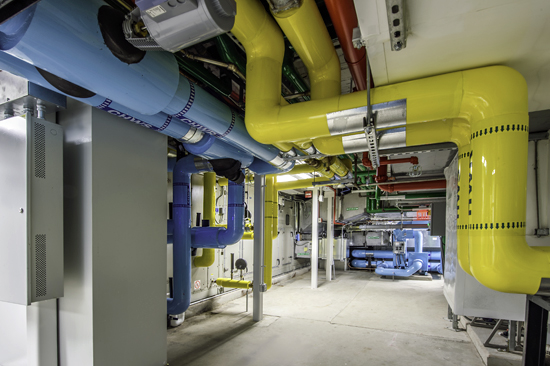 Basement Mechanical Room after restoration. Color coding of all piping jacketing allows greater clarity for system maintenance. The air-handling unit incorporates a six-fan array and was assembled in place over a three-week period.
Photos by Kevin G. Reeves; Courtesy of Westlake Reed Leskosky.
To see the entire case study, click here: The Renwick Gallery of the Smithsonian American Art Museum. 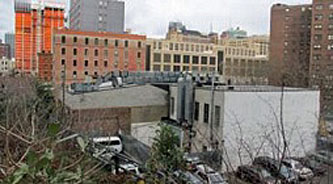 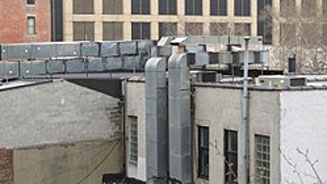 The sensitive placement of new mechanical equipment on the exterior of historic buildings is very important. Highly visible components not only adversely impact the character of the building itself, but also the surrounding site and environment - often a historic district. New utilities should be designed to be as small as possible and be located in secondary areas with limited visibility. These installations do not meet the Secretary's Standards.
Photo Credit: Audrey Tepper 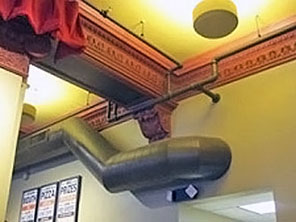 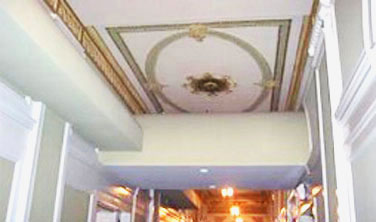 Care must be taken in historic interiors—especially those that are highly-ornamented—to place utilities in locations that avoid impacting historic fabric. These examples do not meet the Secretary's Standards. Photo Credit: Audrey Tepper

B. Information and Communication Technology

Information technology (IT) systems are complex and constantly changing. These systems have exponentially increased the need for easily accessible wiring raceways. Today's modern office buildings incorporate raised floors that allow easy access to wiring systems. Although not appropriate for all buildings and spaces, in some historic buildings this approach can enable retention of ornamental ceilings and features. Wireless IT systems enable historic buildings to meet changing needs and workspace standards with less impact than is required to route wiring through architecturally significant interiors. Space reservation systems support shared use of meeting spaces, mobile workspace, and other efficiencies that contribute to the sustainable reuse of historic buildings in urban areas and costly real estate markets. 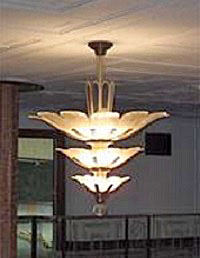 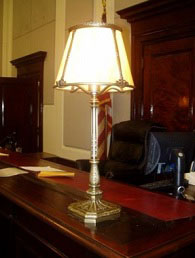 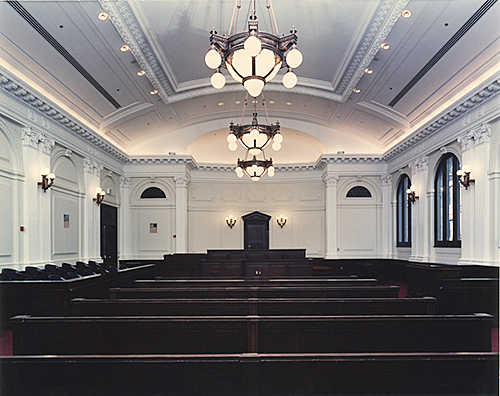 Limit recessed lighting to the ceiling perimeter to avoid overpowering historic chandeliers and changing the character of historic ceilings. This example is of the Edward T. Gignoux U.S. Courthouse in Portland, Maine.
Image courtesy of the U.S. General Services Administration. 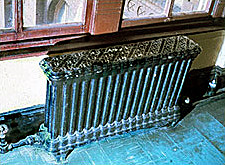 Some plumbing elements such as this radiator are historic.
Photo Credit: National Park Service

Prior to initiating a plumbing upgrade, it is important to ascertain whether these traditionally utilitarian spaces are in fact historic and must be preserved. If they are not historic, then rehabilitate them with sensitivity to the surrounding historic building materials, finishes, and features. However, if plumbing elements are historic, then take care to preserve them: 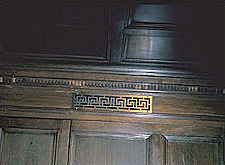 All or part of a conveyance system may be historic. For instance, this elevator cab has several character defining features, such as exotic wood paneling, elegant moldings, and metal air vents.
Photo Credit: National Park Service

Elevators and escalators may also contribute to a building's historic significance. First ascertain whether these features are historically significant: 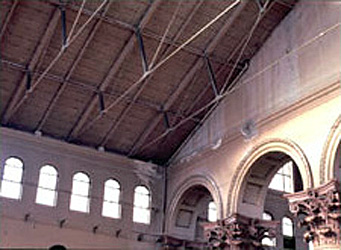 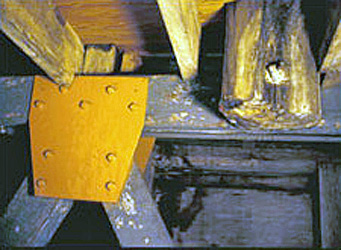 Structural elements are an inherent part of the architect's intent; determine which parts, if any, of a building's structure are historic and rehabilitate appropriately. National Building Museum in Washington, DC.
Photo Credit: National Park Service