Utilize Cost and Value Engineering Throughout the Project Life Cycle

Throughout a project's planning, design, and construction phases, Cost Management is employed as a means of balancing a project's scope and expectations of quality and budget.

The approach can be summarized as requiring the following three steps:

This process involved is represented graphically as follows:

Milestone cost estimates at various stages of the process are critical components of the cost management activity. Cost Management encompasses more than cost estimates however—it also includes Risk Management and in the federal arena, can include Earned Value Analysis. Risk Assessment and Management are important as identified risks on construction projects are typically financial in nature. Therefore early in the project an assessment of risk is crucial to establish the budget parameters within which the project must be completed. The calculation of project contingencies should be based on an assessment of the risk surrounding the project (site issues, availability of bidders, method of procurement, and critically the market conditions in the location of the project. As risks are mitigated (site investigation is done, market survey completed, program finalized, design started, and so forth) then contingencies can be reduced and the range of estimated final cost narrowed.

The firm charged with managing the costs of the project should ideally be hired directly by the owner, early in the process, and should be independent of both the architect/engineer and the construction contractor.

Cost Management differs from Building Economics in that it is typically concerned with the initial costs—or first costs—of accomplishing new construction or renovation projects. A project must start right in order for it to finish right, so the establishment of an appropriate budget is critical. Early in the planning stages, both building owners and designers must agree on an anticipated cost of the project at bid award. This is a critical stage in the cost management process—an inaccurate budget can doom a project to continual stress and compromise, with neither the owner, end-user, nor design team being completely satisfied at the end. A common mistake at this stage is to take a program of areas and apply those to historical costs without making adjustments for the myriad factors which affect construction costs—size of the project, renovation versus new, location (has a market survey been done?), price increases since the date of the data used, method of procurement, overall quality of the space envisioned, LEED rating desired if any, access and locational factors such as dense urban, traffic and sidewalk protection, water location, bid competitiveness in the local market, etc.

Preliminary Estimates are employed in the early planning phases of a proposed project to match an owner's needs, expressed as written programmatic requirements, with budget constraints in order to establish its overall scope (size) and quality expectations.

The proposed method of procurement, or delivery approach in the above graphic, should be identified at this stage. The options available today are more numerous than in the past—traditional Lump Sum, Construction Manager as Constructor (CMC) (also known as CM at Risk), Design/Build, Integrated Project Delivery (IPD) and so forth. Each method has pros and cons relative to cost and risk, so the method selected should also be factored in to the project budget. These can generally be summarized as follows:

Integrated Project Delivery as a procurement method is gaining some traction in the industry, although it still only is used on 1–2% of projects and legal difficulties around liability remain a hurdle for broader acceptance. From a cost management perspective the benefits remain elusive as the various parties on the team generally have differing objectives, although doubtless the coordination of the trades and cohesiveness of the design may impart some time savings and reduced change orders during construction. The use of Building Information Modeling (BIM) is likewise a growing trend and from an owner's perspective a very useful tool, with similar benefits to IPD but few documented advantages related to cost management. While the technology is improving, the quality of estimates produced from BIM models is still fairly uneven. Quantity take-offs are becoming more accurate (although still highly dependent on the accuracy of the data entered into the model) but the pricing aspects and the capture of components not yet in the model still require considerable scrutiny by the cost estimator.

Value Engineering should also be considered at this stage. Any changes to the program at this early phase have very little, if any, impact on schedule and A/E time and redesign costs, but the benefits in terms of solidifying the program and establishing project goals can be huge. (See Part One Section 6 of the ASPE Standard Estimating Practice) 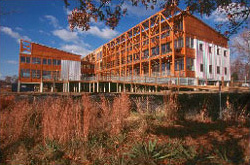 The Chesapeake Bay Foundation Philip Merrill Environmental Center in Annapolis, MD was the first LEED Platinum building in the world. It is very cost-effective and operates in harmony with the land, natural resources, and the Chesapeake Bay demonstrating that green buildings work. The Merrill Center is an ENERGY STAR "Top Performance" building with a rating of 78 for energy efficiency. This rating is 56 percent better than the national average for similar office buildings. Based on the center's average energy use, this equates to an annual savings of almost $100,000.

Once an initial budget has been established, the scope set and the quality expectations documented, it is important to monitor the estimated cost of the project by employing a series of increasingly precise cost estimating techniques that coincide with further development of design and construction details.

Intermediate estimates are employed at various stages of project design development as part of ongoing cost management, and as a means of evaluating competing alternative construction assemblies, systems, and materials. On large projects it is common practice for an owner to employ a construction manager or professional estimator to continually update project estimates and provide feedback on budget impacts of decisions on major design elements. In many projects having parallel estimates by the construction manager and an independent professional estimator followed by a reconciliation meeting to review and revise both estimates leads to a truer picture of the potential costs of a project. The drawings and specifications should also go through a constructability review, wherein an independent review team analyzes the construction documents for completeness, coordination between disciplines, cost-effective design solutions, and general code compliance (as mentioned earlier this is where Building Information Modeling (BIM) and Integrated Project Delivery (IPD) bring significant benefits). The specifications should also be reviewed to ensure that the General Requirements included in division 1 are not overly restrictive (e.g. working hours, noise restrictions and so forth) and that throughout the specifications the use of proprietary materials is minimized. A market survey should have been carried out on sizable projects to determine where the bidders will come from—is the local market sufficiently large to accommodate the project, or will the major subcontractors be at capacity and therefore likely to bid high, if at all? It's often worth re-verifying the market survey if one was done much earlier in the process.

The estimates become much more refined in parallel with the refinement of the design, ultimately resulting in a pre-bid estimate that captures the entirety of the project.

Earned Value Analysis is a useful tool in cost management, in that costs for each component of the project (in a Work Breakdown Structure, or WBS) can be tracked against the initial budget, and adjustments made to ensure the overall budget is on track. Movements between components are common; however, without tracking where costs are changing, the budget is in danger of being exceeded leading to re-design or extensive value engineering. Similarly future cost planning can be improved by the use of Earned Value Analysis, by tracking where the money really goes in a project.

At the bid stage, the drawings should be 100% complete; however, in many instances this does not happen, leading to addenda being issued to clarify details, resolve conflicts or to complete the design. Often the estimate is not adjusted to account for these design changes, leading to a so-called final estimate that really does not represent the scope of work being bid. The estimate should therefore be adjusted during bidding to reflect the same information the bidders receive. Also a read of the market at bid stage is still useful, and can be included in a risk assessment to determine a range of bids expected. In a particularly volatile market, the use of bid options may allow the owner some flexibility in achieving the budget on bid day. It is recommended that add options or alternates be utilized instead of deduct options or alternates. In addition, municipal policies need to be checked to determine if the options or alternates need to be taken in a specific order.

The preparation of the bidding documents is also crucial in an overall cost management strategy. Consideration should be given to contract clauses that govern changes in the work and how they will be valued (e.g. by reference to a published price book or trade manual); allowable mark-ups on changes by the various levels of contractors and sub-contractors; notice requirements for delays; the use of unit prices for changes and any other clauses that may affect the final cost of the project.

During construction the focus shifts from predictive cost estimating to reactive cost management of any changes in the work. Changes arise from a number of different sources—unforeseen conditions, owner-generated changes, drawing errors and omissions, code issues or contractual claims. Also changes can arise from on-going proactive cost management, either generated by the design team or the general contractor, where one of the parties proposes a better-value substitution (sometimes known as Value Engineering Change Proposals or VECPs). For all reviews of changes the owner should first establish the ground rules as delineated in the contract documents, agree a format with the general contractor, and require the general contractor to first review change proposal from subcontractors before compiling and forwarding to the owner. Changes should also be reviewed by the design team for entitlement—is it really a change to the scope and are there any credits due? Then the agency Construction Manager or independent cost consultant should review the pricing against the contract and industry norms, leading to an independent government estimate for presentation to the general contractor. Wherever possible the value of the change should be agreed before the work is installed, otherwise the owner's leverage to agree a fair and reasonable price is greatly diminished.

To provide data for future cost management, an evaluation is often carried out to prepare a detailed cost analysis of the completed project and to develop lessons learned to inform future design decisions. The cost data captured should also be fed back in to the owner's database to better inform future estimates and budgets. Other areas to consider here include a review of energy performance of the building during occupancy, to ascertain if the data used as the basis for selection of the mechanical and electrical systems and components was accurate vis-a-vis the actual performance.