by the WBDG Accessible Committee

The major resource for guidance on accessible design is the U.S. Access Board (Access Board). The Access Board is an independent federal agency devoted to accessibility for people with disabilities. Key responsibilities of the Board include developing and maintaining accessibility requirements for the built environment, transit vehicles, telecommunications equipment, and electronic and information technology; providing technical assistance and training on these guidelines; and enforcing accessibility standards for federally funded facilities. For additional resources, see the Access Board's Links Page. Animations of many accessibility solutions can be found on the Animations page.

This page will provide an overview of the ABA and ADA Standards, and other Guidelines to consider for access. This information should be considered in context with the overall design objectives of the project and the information in the Accessible branch of the WBDG.

Standards issued under the Architectural Barriers Act (ABA) apply to facilities designed, built, altered, or leased with certain federal funds. Passed in 1968, the ABA is one of the first laws to address access to the built environment. The law applies to federal buildings, including post offices, social security offices, federal courthouses and prisons, and national parks. It also covers non-federal facilities, such as public housing units and mass transit systems, built or altered with federal grants or loans. Coverage is limited to those funding programs that give the federal agency awarding grants or loans the authority to establish facility standards.

The U.S. Department of Defense (DOD), U.S. General Services Administration (GSA), U.S. Postal Service (USPS), and U.S. Department of Housing and Urban Development (HUD) are the ABA standard-setting agencies. DOD, GSA, and USPS adopted Parts 2 and 3 of the Access Board's guidelines, making them enforceable ABA Standards. HUD has not yet adopted the guidelines; consequently, non-military housing subject to the ABA must still comply with the Uniform Federal Accessibility Standards first issued in 1984. All currently applicable ABA standards are available online. 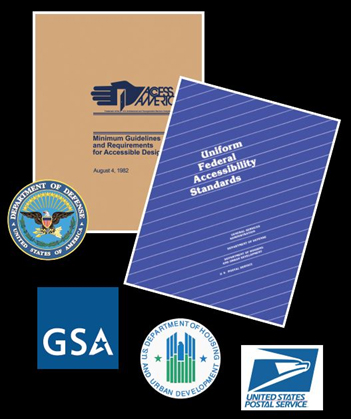 (*) The Department of Housing and Urban Development has not yet adopted its new ABA accessibility standard, and is still using the Uniform Federal Accessibility Standards (UFAS).

The Access Board celebrated the 50th Anniversary of the ABA in September 2018.

The following standard-setting agencies have published their new ADA standards, consistent with the updated ADA guidelines:

For more information, contact the U.S. Access Board for a guide to ADA and ABA Accessibility Guidelines and the online versions of the current ADA and ABA accessibility standards in effect for the standard-setting Federal agencies.

The Fair Housing Act (FHA) was passed in 1968 as Title VIII of the Civil Rights Act of 1968, prohibiting discrimination in the sale and rental of housing as well as other housing-related transactions. The Fair Housing Act was amended in 1988 to include protections for people with disabilities, requiring certain housing projects to meet a basic level of accessibility. In response, the U.S. Department of Housing and Urban Development (HUD) adopted accessible design and construction guidelines to implement the accessibility requirements of the FHA. The guidelines apply to "covered" multifamily dwellings with four or more units designed and constructed for first occupancy after March 13, 1991.

Section 504 of the Rehabilitation Act of 1973 (Section 504) is a federal accessibility law which seeks to prevent discrimination, based on disability, under any program or activity receiving financial assistance from any federal agency, including the U.S. Department of Housing and Urban Development (HUD). Section 504 requires newly constructed multifamily dwellings with five or more units, and alterations of housing facilities in HUD-assisted programs to meet the Uniform Federal Accessibility Standards (UFAS). The UFAS Standards are available online.

For more information, contact HUD for guidance on the FHA or Section 504 and 508 standards currently in effect.