School libraries differ from most other types of libraries because they are contained within school buildings, which, in addition to library space, may include classrooms, auditoriums, circulation space, administrative offices, cafeterias, and the like. As a result, school libraries, or library media centers (LMCs) as they are commonly called, are smaller than their counterparts. Appropriate space planning for present needs and future expansion is imperative in the school library program. According to a study by the Wisconsin Department of Public Instruction, computer and video technology, in addition to other forms of media including print material, is an important part of education. Use of technology in classrooms and in the library must include design aspects that support learning, including adjustable lighting, ample electrical connections, sound control, and space for expansion. School library space must also accommodate computer learning that is separated from quiet reading, group study, circulation, reference work, and other learning activities.

A. Types of Spaces

There are many broad types of school library space:

In addition to the emerging issues of sustainable design and wiring technology to accommodate modern communications (see Public Library: Emerging Issues), and digital media and the space required to accommodate it (see Academic Library: Emerging Issues), connecting classrooms to the library and to outlets for distance learning is an emerging issue in school media center design. As outlined in Classrooms, Library Media Centers, and New Technology, a study by the Wisconsin Department of Public Instruction, some other design considerations include:

Increasingly, school curricula are based on collaborative and group projects. As a result, there is less and less emphasis on traditional, individual study settings, such as long rows of individual study carrels. Instead, school libraries are developing learning centers, which provide group study rooms and settings, well-supported by access to electronic information resources, hardware tools, and associated productivity software. 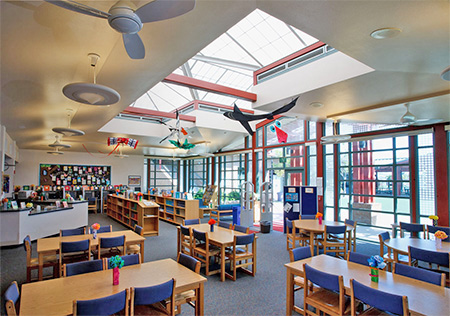 Model Building Codes that may apply include the following (check with local building departments for code requirements):

Also note that the American Library Association, Building and Equipment Section has published a guide to recommended space allocations for furnishings, equipment, and resources to be housed in the library: