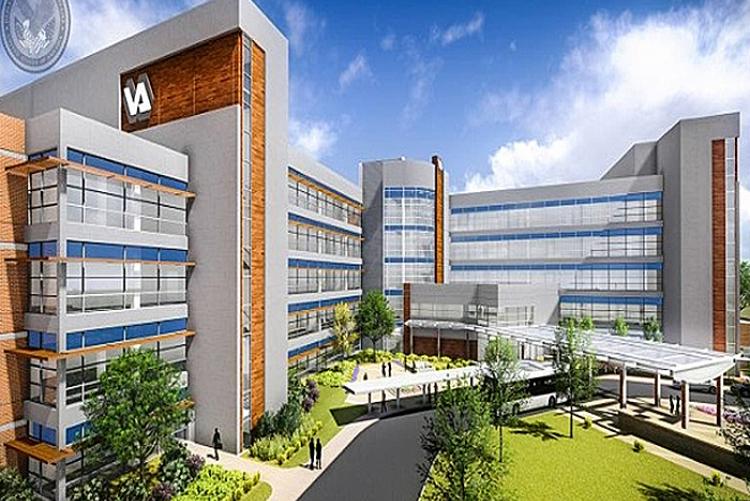 View of the entrance to the VA Clinic, Mecklenburg County, NC

The VA Health Care Clinic located in Charlotte, North Carolina, is a 20 year lease back, designed by RPA Design, P.C., built by JE Dunn, and owned by Childress Klein Cambridge. The building was fully modeled and documented within different BIM environments, including a total of 12 Revit models and over 29,000 pieces of equipment. The equipment was fully modeled and tracked through the design and implementation processes.

Mecklenburg County Code Enforcement is a consolidated authority responsible for all building construction plan review, permitting, and inspections throughout Charlotte, Mecklenburg County, and the six towns of Davidson, Cornelius, Huntersville, Matthews, Mint Hill, and Pineville. Issuing more than 90,000 permits and performing over 250,000 B-E-M-P inspections annually, the Department is recognized nationally as one of the most advanced users of technology in support of permitting and inspections (P&I), currently employing a 99% paperless process. The department's rigorous internal training schedule is key in retaining an ISO-BCEGS class 1 rating for commercial construction, held continuously since 2003. Code Enforcement has 225 full-time staff, with all expenses funded strictly by fee revenue (no general fund support) and excess revenue retained in a reserve fund restricted to use in support of building P&I. Since 1996, the department has moved away from a "one-size-fits-all" approach to service, offering an array of service streams designed to fit a variety of project needs, including several premium services, detailed below. The department prides itself on providing large authority capacity, experience, and code sophistication, while simultaneously offering attention to the details of every project, large or small, and a high level of customer service. Code Enforcement embraces an ethic of continuous improvement, and consequently is widely known as a leader in P&I innovation, with a long list of cutting-edge changes including the following:

The IPD process using the Hybrid Collaborative Delivery Team was well suited for this project as it was modeled using BIM software. It was also a fast track project with several unresolved design elements at the start of construction. The design team refined their model by incorporating the client driven change requests and changes driven by field conditions while the construction was in progress. Due to the cyclical nature of permitting and inspection when using this process, the design team had the flexibility of releasing small portions for construction as their model evolved.

An umbrella permit was issued at the very beginning of the process; it was the only permit issued for the project (Ref: NC Admin code section 106.2.3.1). The design team and the construction team continuously worked on the model and it was reviewed by the code officials as it evolved. The project team established milestones for submitting a snapshot of their model for review, approval and construction. Each review cycle is called an iteration and the submitted model was reviewed for code compliance by all county trades and city agencies (AHJ). Upon approval, that portion of approved work was executed and inspected in the field. At times when there were inconsistencies in the field, it was brought to the attention of the design and construction team and asked to be incorporated into the next model update. The work progressed unhindered, even at times when it would have been typically stopped had they used the conventional P&I process thereby rendering the customer significant savings in time, money, and resources.

The VA project received the umbrella permit on Sept 01, 2014. They have been through eight iterations so far, which include owner-driven changes, field changes, and coordination updates. The project is estimated to be completed on January 14, 2016.

The City of Charlotte and other external agencies such as zoning, backflow prevention, and public health are involved with this project. They reviewed all their documents at the beginning of the project, and the issuance of the umbrella permit was contingent upon approval of certain specific agency documents. 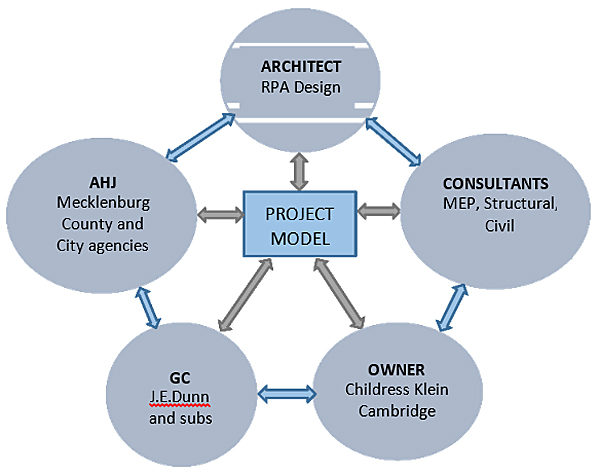 The Integrated Project Delivery (IPD) process enabled all the stakeholders to work on the model at the same time. The architect used Autodesk Revit to build and document the model. The BIM model was then shared on a cloud server to collaborate with client, consultants, and contractors. All the project stakeholders were able to monitor the changes made to the model simultaneously and they could make necessary adjustments to design and cost at their end. The BIM-IPD process also offered greater collaboration among construction trades as they were all able to work harmoniously in the field without interfering with each other's system layouts as most of the clashes were detected in the model prior to construction.

The graph below shows that in BIM-IPD, a great amount of design input occurred earlier in the project rather than later, compared to the traditional process with two- dimensional (2D) drawings in a Design-Bid-Build environment. Since code officials were brought in early in the process, costly changes were averted by the design and construction team. Some examples: 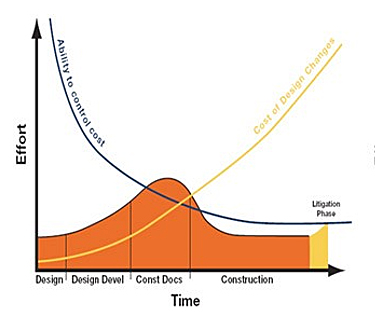 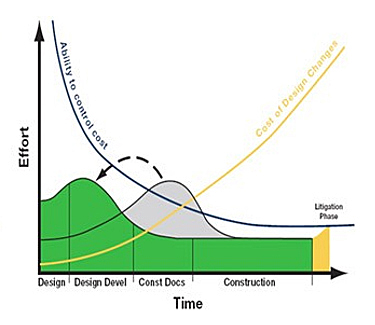 Through various uses of technology, the VA HCC Charlotte was designed and documented very efficiently. The use of Autodesk Revit to build and document the full BIM model for coordination allowed for a very smooth design and coordination process. The permitting and inspection was done by the Hybrid Collaborative Delivery Team with the same team of code enforcement officials handling the project from start (plan review) to finish (inspections) and CO. The plan review was conducted in the 3D BIM model.

The ability to have an open dialogue with the HCDT code officials gave the project design and construction team a great advantage. Engineers, architects, and contractors were able to talk about regulatory issues with code officials well ahead of time in a virtual environment, which facilitated the project team in making early decisions on conflicting items.

Using the BIM model during construction helped reduce cost as it eliminated rework in the field in most cases as the problems were detected very early. The construction team used the BIM model to run clash detection on the building systems and this enabled quick and coordinated installation of the systems by the construction crew. They were able to execute their portion of work without depending on the schedule for other trades. For example, the electrical conduits and plumbing pipes were placed at a predetermined elevation and location based on the BIM model, and were independent of when the HVAC ducts went in at the same location. This helped reduce the labor costs due to ease of installation.

They also used the BIM model to generate files that were detailed enough for fabrication. Pre-fabrication of building elements greatly reduced the construction costs. BIM modeling allowed systems to be modeled in sections that were easily built in a controlled environment off site (higher productivity and better quality) and then pieced into place on site.

The project team used electronic positioning products like Trimble which utilized data from the BIM model. This greatly improved accuracy and reduced the manpower required to perform this task manually in the conventional way. 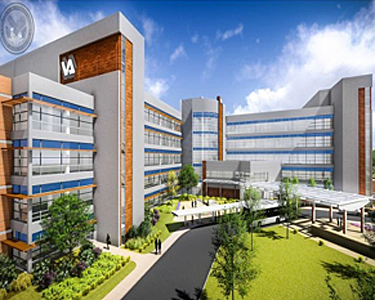 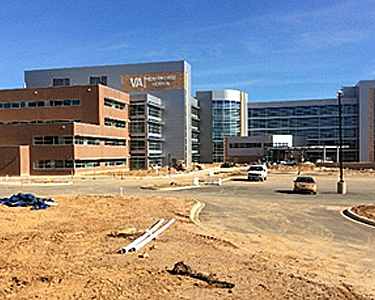 View of the entrance to the VA Clinic. 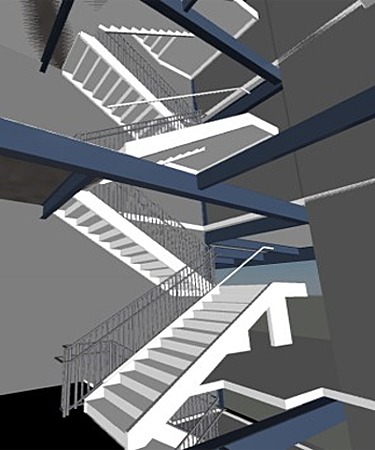 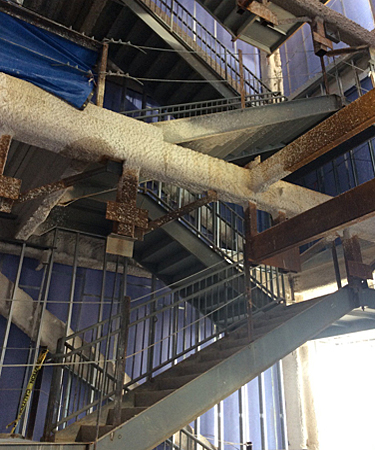 Fireproofing of the main structural members near the stairs (virtual and actual inspection). 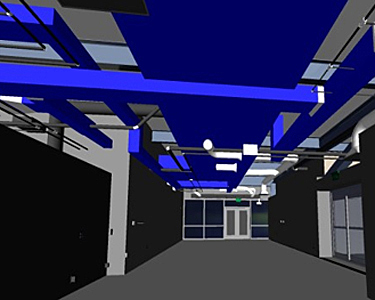 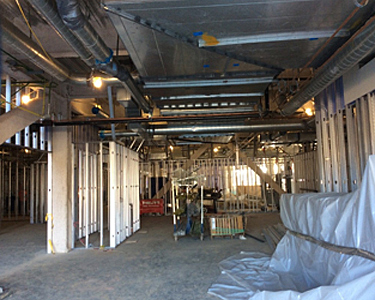 HVAC duct layout above the ceiling (virtual and actual inspection).